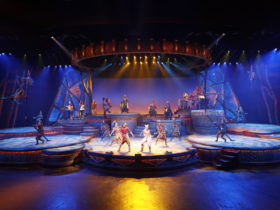 [On location] It is (almost) time…

Diversity and inclusion are much more than key values at Disneyland Paris, as an international and multicultural company with 17,000 Cast Members who represent 124 nationalities, speak 20 languages and work in 500 professions*. Gender equality is a core pillar of the resort’s commitment, with women representing half of all Cast Members and 80% of those Cast in permanent roles. About 43% of managers and above are women – including our president, Natacha Rafalski. Women are working across all areas of our business and at every level.

For the second year in a row, Disneyland Paris scored 94/100 on the annual Gender Equality Index which was established as part of the “Avenir Professionel” law in France. This serves as a yearly measurement of company commitments to provide an environment rooted in gender equality.

Gender equality is furthered at Disneyland Paris through impactful policies and ongoing engagement opportunities which continue to expand. The resort has implemented several equality agreements to promote gender equality, from recruitment and hiring practices to support throughout the Cast experience. There are also numerous dedicated employee-driven groups to provide inspiration, support and engagement for Cast Members all year long, as well as exclusive conferences and events with inspiring guest speakers, workshops and discussions on gender equality and diversity.

Disneyland Paris remains focused on growing these efforts so that Cast Members have the resources and support they need to develop their careers and write their own stories. Our diversity of talent is the key to excellence and creativity, enriching the professional and personal experiences of Cast while helping us to create magical experiences for guests.

Check back on our website and social media channels this month as we share more about the resort’s commitments, including our annual International Women’s Day internal conference and profiles of female Cast Members at Disneyland Paris next week.