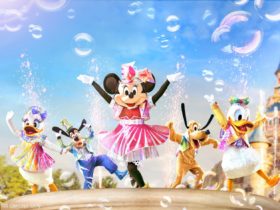 Disneyland Paris is unveiling new images of the attraction’s construction site, which will include new decor, familiar vehicles for Cars fans, a new boarding station, and extensive landscaping work. This new family adventure represents another step in the plan to transform Walt Disney Studios Park.

Teams from Walt Disney Imagineering and Pixar are collaborating on the project, in addition to the know-how and expertise of artisans, both locally in Seine-et-Marne and across Europe with suppliers from Italy and the United Kingdom. Several of the attraction’s iconic pieces were created by companies very near to Disneyland Paris, in Collégien and Crécy-la-Chapelle in particular.

This attraction, inspired by Cars, will transport guests on a picturesque road trip adventure, as reimagined by Pixar. This journey will be marked by local discoveries, including one of the world’s largest flat head nuts, and guests may see some of the most popular Cars characters, making Walt Disney Studios Park a place of unforgettable adventures where Pixar stories come to life.