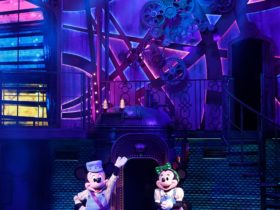 The Themed Entertainment Association (TEA) – the global, nonprofit membership association for the creators of compelling places and experiences – has announced the slate of TEA Masters honorees for 2020. The TEA Masters program celebrates masters of their craft in the global visitor attractions industry.

Congratulations to Disneyland Paris Imagineer Tracy Eck, for being honored as a TEA Master in Art Direction, Show and Design Quality.

Tracy Eck is a native of Chicago, where she started her early career in theatre after receiving an MFA in Theatre Design at the University of Michigan, Ann Arbor. Inspired by French theatre and culture, she moved to Paris in the late ‘80s, where she worked as a freelance lighting designer. Tracy started her career in themed entertainment in 1990, when she was hired as a show lighting designer with the team of Imagineers for the Disneyland Paris project. She quickly became an essential part of that park and was one of a small group of Imagineers to join the

Design and Show Qualityteam after opening, to continue to train the maintenance staff in the upkeep of the park and to design new projects.

Tracy shifted back as a lead lighting designer for the development and installation of the Paris second gate, the Walt Disney Studios Park; and when that project was complete, she returned to her role with Design and Show Qualitywhere she continued to work on numerous refurbishments as well as new projects.

Tracy continued to learn and grow as a designer and earned a promotion to lead Art Direction for the Disneyland Paris portfolio. After 29 years in the themed entertainment world, Tracy is at the top of her craft in art direction. She has managed many complex projects from concept through completion. She remains an essential part of the DLP team where she has mentored many young designers over many years.

Tracy Eck excels in art direction and as lighting designer, and has been a key player on many themed entertainment projects, including rides, restaurants, retail spaces, area development, and major icons. She sets the highest standards for herself to accomplish a quality product that will delight Disney guests; and she inspires other members of the team by her example. Tracy is an excellent team player, and brings her highly developed training in storytelling and the theatrical collaborative arts to every project. She has a skilled designer’s eye and a healthy imagination that adds value to every project she touches, and is a true inspiration to the young designers placed under her wing.

She has taken on major refurbishment plans at iconic attractions such as “it’s a small world” at Disneyland Paris. Over many years, she has encouraged and inspired new products working with many European and US manufacturers. Tracy Eck is a star of our industry in Europe. She is a driving force behind the excellence of Disneyland Paris… and she’s a role model of a successful individual in our industry living their true dream.