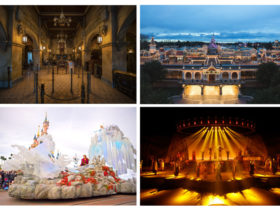 After a year of reburbishments, one of the most popular attractions is about to reopen its doors in February 2021 at Disneyland Park!

Buzz Lightyear Laser Blast is a thrilling adventure in space that takes us back to the epic battle between Buzz Lightyear and the infamous Emperor Zurg from Disney•Pixar’s Toy Stoy 2, inaugurated in Discoveryland in April 2006. This undertaking was the largest interior and exterior refurbishment of the attraction since its opening.

The Maintenance, Construction and Imagineering teams at Disneyland Paris worked together on the sets and Audio-Animatronics, as well as on the exterior where, among other things, neon lights were replaced by LED ribbons on the façade. Special effects, painting and lighting were also completely redone, and the dark ride attraction will now operate with ultraviolet light, known as “black light.”

“It was necessary to identify the areas to be restored due to the change of black light lighting that took place in all the scenes,” said stage finishing designer Anne-Cécile Houron. “It is a question of repainting all the sets and characters so they have their original brightness and have a very flashy and rather atypical color result.”

With interactivity as one of the key features of the attraction, about 40 accessories and animated figures have also been revisited, to guarantee this family attraction’s vibrancy.

See you in 2021 to (re)discover this must-see attraction at Disneyland Park!