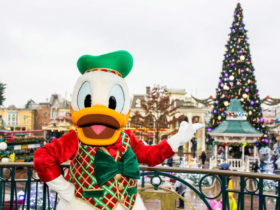 [TOP 10] Disneyland Paris ornaments available on shopDisney, for a perfect tree in every way!

Disneyland Paris has been celebrating its 30th Anniversary since early March, and continues to expand by successively launching large-scale projects, especially within Walt Disney Studios Park.

Avengers Campus – with its majestic Quinjet aircraft centrepiece – has entered its final construction phase and is expected to open in summer 2022. And just next door, work has already begun on the future Frozen-themed area which will immerse Guests in the Kingdom of Arendelle – iconic ice mountain and all.

Frozen is one of the many Disney stories that come to life every day at Disneyland Paris. With enchanting shows and parades, such as “Disney Stars on Parade” or “Disney Illuminations”, Guests can already delight in the magic of this successful franchise from the Walt Disney Animation Studios. In addition to the expansion of Walt Disney Studios Park, the renovation works at Disneyland Hotel promise to extend that experience beyond the Parks, as it also undergoes a royal transformation.

Elsa, Anna, Olaf, and their friends will soon welcome Guests to their very own world within Walt Disney Studios Park. Construction started recently on the Frozen-themed area, with the project calling upon the talents of people from hundreds of diverse professions, spanning Walt Disney Imagineering teams in Paris and across the world.

As Guests approach the heart of the Park, Elsa’s Ice Castle will welcome them from afar. This magnificent structure will stand atop of a 131-foot snow-covered mountain, right next to a 3-hectare lake. The Kingdom of Arendelle will open its gates to the public “for the first time in forever”, and on this occasion, many experiences will await, including a new attraction that will take Guests on a journey alongside iconic Characters from the world of Frozen. The village – with its film-inspired architectural style – will be home to a shop, and restaurant serving dishes with a Nordic touch. In addition, Guests will get to meet their favourite Characters during a royal Meet & Greet they will remember forever.

A New Promenade in a Lush Green Setting

To access this new area, Guests will walk along a promenade surrounded by lush landscapes; a combination of themed gardens and green walkways. This fantasy world – perfect for daydreaming or enjoying entertainment – will serve as the transition between the new themed areas that will surround the future lake, and will completely transform the Park’s atmosphere. Here, Guests will be treated to an outdoor family attraction, an elegant table-service restaurant comprising 250 seats on the lakefront. With its Art Nouveau design, the restaurant will offer breathtaking panoramic views across the lake along with special meet-and-greet opportunities with Disney Characters.

These new projects are yet another step in the ambitious transformation and expansion plan for Walt Disney Studios Park. More information will be provided as works progress.

“Since its release in 2013, Frozen has been one of our Guests’ favourite stories. With the start of the works related to this new area, along with the beautiful lakefront promenade which will lead to it, we are delighted to continue the expansion of Walt Disney Studios Park. We are leveraging all the creativity and expertise of our Walt Disney Imagineering teams – whether in Paris and elsewhere – along with local craftsmanship to bring Arendelle to life. This is bound to be an experience that will make our Guests’ hearts melt!” said David Wilson, Vice President of Walt Disney Imagineering Paris.