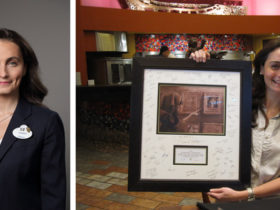 Women Behind the Magic : Yasmin Kouchouk

Christmas is a special time to share precious moments with the ones we love, especially at Disneyland Paris. To put us in the holiday mood, we’ve asked Imagineers and Cast Members to share their most cherished Christmas memories with us.

Today we have Set-designer, Olivier Dusautoir

What are your first Christmas memories at Disneyland Paris?

It was as a dancer for the Christmas Parade Mickey’s Nutcraker. Back then, I was a student at the “École Supérieure des Beaux-Arts” in Paris and I worked weekends at Disneyland Paris. I also happen to have a classical dance background. I went to the Conservatory – dance, tap, jazz – in addition to the Beaux-Arts. Following my sister’s footsteps, who was already a dancer at the Park, I auditioned and found myself performing in various parades, including this one, starting in 1997.

What struck me immediately was the adaptation of the music from Tchaikovsky’s The Nutcracker. I remember its rhythm and energy. It really made me want to dance. I was in the Russian part of the parade and I was wearing a hat and had a sword. The choreography was very lively and helped warm us up against the cold winter weather!

Christmas at Disneyland Paris is a very special time and the Park is so beautiful that instead of going home after our day’s work, we would meet up between Cast Members to walk around and admire the decorations, the sun setting and the lights appearing. It’s a magical moment!

In what other Christmas shows have you participated?

I had the chance to participate in the Tinkerbell’s Fantastic Journey, the dinner show going into the year 2000 at Disney’s Newport Bay Club. After the show, along with my girlfriend and friends of the troupe, we found ourselves on a terrace of the hotel watching the fireworks at 360°. It was incredible! It will remain one of my most beautiful memories.

Afterwards, you joined the backstage taking care of props.

This passage from being on-stage to backstage was very interesting. I was in charge of the props for the parade and Christmas shows like Mickey et la Magie de l’Hiver (Mickey’s Winter Wonderland). I found myself repainting and repairing the sword I carried as a dancer a few years beforehand! There were all sorts of Christmas props that passed through my hands.

Which accessory made the biggest impression on you?

Santa’s chair! It was a very impressive upholstered chair with elegant patterns, upon which you could almost sit two people. I had seen it in the Park, but the day I was told I was going to take care of it, I felt like a little elf! There’s something moving about it, thinking that you’re going to work on Santa’s chair and that he will be in all the photos, in all the children’s albums and family albums.

Another accessory that marked me, but for other reasons, is the big Goofy shoe that Donald catches with his fishing rod in Mickey et la Magie de l’Hiver (Mickey’s Winter Wonderland). It was very funny. It changed from year to year: Sometimes it was patent leather brown and sometimes the leather was a bit red. Everybody had their word to say. It’s just a small object, but it’s a bit like the ACME accessories in Who Framed Roger Rabbit? They have a life of their own. When I would go to see the show, it always felt like there was something telling me that I was part of it!

Another detail of the show that struck me was that in the last sequence, there was a sled pulled by two percheron horses. We had a very strong bond with them: When we would open the door on the garden side to access the stage, they would enter with such phenomenal power. It was a pleasure to work with the Pony Farm Cast Members who took care of the horses and these Cast Members in turn,  were thrilled to be part of the show. Their work often takes them to the Park, especially on Main Street, US.A., but this show particularly made their work more noteworthy.

Afterwards, you evolved within the company and became a Set-designer.

Yes, I did a brief stint as a puppeteer at Animagique, and then, thanks to my Fine Arts degrees, I began to collaborate with the park Set-designers, first from time to time and then permanently. I was an assistant for a few years before becoming a full-fledged Set-designer. It was in this context that for Disneyland Paris’ 25th anniversary, I had the pleasure of participating in the creation of the Disney Stars on Parade.

As such, to which Christmas-related projects have you contributed?

Often I was fortunate enough to help Jérôme Picoche, the season’s main Set-designer. When we completely renovated the Christmas tree, we recreated all the accessories, both luminous and not. Staging such a large object was a real challenge. It had to look right from afar, have lots of detail up close, and be harmonious. In other words, the luminous and non-luminous elements couldn’t compete with each other.  It had look as beautiful by day, when the lights are off, as it did at night, when it sparkles with a thousand lights. We did a lot of research in terms of design to mirror the different Christmas-related traditions. In that way, our Guests, whatever their country of origin, can find something of their culture. We have tried to take into account everyone’s sense of taste: There are Norwegian-inspired Christmas bulbs, others that are a bit Russian, etc. Of course, to explore the subject, we used internet but we also used our large library full of art books and inspiring pictures. It was extremely interesting. We discovered a lot of exciting things throughout Europe and in the creative world in general. When we undertake such a project, it is not uncommon to refer to the great figures of European art history and then adapt what we find to the stories we tell in our Parks. This is also what makes Christmas at Disneyland Paris unique.

From there, how did the design of this magnificent tree come about?

Sketches, sketches and more sketches! Jérôme is very precise in the details. I learned a lot from him. I also really enjoyed working with the Park’s team of light designers. We did a lot of research and development with them to give a soul to our lighting like for the star at the top of the tree. We started with a cold element – a light bulb – and we had to make it magic! We’ve also worked with Imagineers, including Tracy Eck, to get an external opinion and make sure that all our decorations fit perfectly with the history of Main Street, U.S.A. It’s a delicate balance that has to be found between scenery and scenography. In all, the design of this tree took almost two years of work.

Did you participate in creating The Christmas Parade?

I worked with Jérôme on Santa’s sleigh, the Parade finale. It’s a huge float! Everything started from a drawing in the shape of a boat. It was impressive, very baroque. What I also like about this process is coming to the studio and seeing our projects come to life in three dimensions. It’s magical! We have some pretty amazing people working in the shadows making our sets and tanks. We spend a lot of time talking with them, sharing our vision with them through our designs, and they make it a reality. Sometimes they go even further in detail than we had envisioned.

Have you had the opportunity to experience the magic of Christmas in other Disney Parks?

I was lucky enough to be able to go to the United States several times, as well as Japan. This made me realize how different the way of celebrating Christmas is in other Disney Parks. Americans are very traditional, with lots of small decorations, very simple things that evoke their culture, like the famous popcorn garlands. They also have a completely different way of making the floats and the decorations. In Tokyo, the degree of detail and finishing touches are quite incredible. Be it the video-projections on the Castle or the parade floats, it’s model of scenography that has greatly inspired me.

Working on this team at Disneyland Paris taught me to get out of my comfort zone. When a project scares you… It’s a good sign! Even if it means spending very long hours on it, like an engine, you get reved up. The danger is to repeat yourself. I do everything I can to avoid this, be it through my research or through the tools I use. Pencil and paper, Photoshop, maquettes… It depends on the project. I try to vary the tools I use and the place I work as much as possible. I can work in the office as well as on-site the Park. The important thing is to always find a new angle, especially for an event as famous as Christmas!

I also frequently go to the Park to see how a set works after I’ve revealed it; to see how to improve things. Having been a dancer, propsman, puppeteer, all  of my artistic past serves me in my daily life. It helps me to adapt but also to anticipate the use that artists and Disney characters will make of it. After all, I haven’t forgotten where I come from.

How are your family visits going?

I love to walk in the Park with my daughters at Christmas, and I confess, I love to show them what I’ve done! Their opinion means a lot to me. Sometimes on a project, we get lost in the details but, children go to the essential. They have no filter. My oldest is 15 and the other 11, so they have two different approaches. It’s very rewarding. I have often designed things with them in mind. This allows me to never lose my childlike vision…