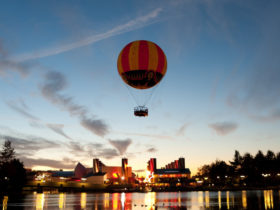 As the end of 2020 edges closer, Disneyland Paris is delighted to share that it has won Europe’s Best Family Park and placed second in Europe’s Best Dark Rides, for Twilight Zone Tower of Terror, both at the European Star Awards. Organised by Kirmes Park & Revue, the awards recognise entrepreneurship, courage and innovation within the European theme park industry.

Additionally, Disneyland Paris has also been shortlisted four times at this year’s Park World Excellence Awards. Now in its third year, the Awards identify “the very best” operators, suppliers, manufacturers and entertainment specialists from across Europe, the Middle East and Africa (EMEA).

Winners will be announced at a virtual ceremony on 8 December. You can register to attend here.

The European Star Awards win and the Park World Excellence Awards shortlist recognise that Disneyland Paris is a place where magic comes alive and unforgettable memories are made. What sets Disneyland Paris – and every Disney Park – apart is our exceptional commitment to the ever-changing needs and interests of guests. The stories and characters from the likes of Frozen, to The Lion King, Marvel and Star Wars truly come to life here, continuing to fuel the unparalleled guest experience. Disneyland Paris has one single goal in mind: to exceed guest expectations. And despite a difficult 2020, it has remained committed to creativity and the heart of Disney’s brand DNA: innovation.