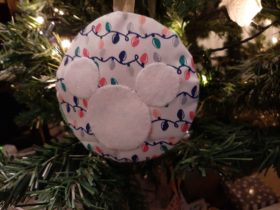 A handful of Cast Members look after our destination during its temporary closure, some on site, most of them, working at home. Paul is one of those Magic Keepers.

Tell us about your background and experience…

I’ve been with The Walt Disney Company for 30 years. Before that… I was in school! I have a Master’s degree in Music Performance – Trombone, which led me to start my career as a professional musician with Disney. After several years, I joined the show production teams, first as a Production Assistant, then as a Production Manager and Producer, and now as an Executive Producer.

Tell us more about your current role.

What are your missions during the temporary closure?

My priority and that of my teams is to define the show offerings for the reopening of our destination. Which Disney characters will our Guests be able to meet? At what locations? What protocols should be put in place? These are just some of the questions we are working on in close collaboration with the Operations and Safety teams, with the aim of delivering the most immersive experience possible, while respecting health standards.

What other projects are you currently working on?

I’m continuing to work on the show program for the next few years, particularly for 2021 and 2022, and also, that for future Entertainment content in the Walt Disney Studios Park.

What is your biggest challenge related to the current situation and the positive things you get out of it?

The context is obviously difficult for many Cast Members and vendors. The challenge is to stay focused on our mission and the future of our destination. In spite of the current situation, the patience and positivity of the Cast Members at Disneyland Paris inspires me enormously.

What’s a typical day for you?

There’s the one before March 2020: all day at the office, going from one on-site meeting and location to another. And then there’s the one nowadays: in front of my computer, video-conference after video-conference. It’s the new standard! The way we meet and work has evolved and shows that we can be productive from anywhere. I also think working remotely is less stressful in many ways as you work from a familiar environment and can more easily balance your professional and personal life.

Your philosophy at work?

“People first”, “Cast Members first”: I dedicate myself entirely to my teams. My goal is to create an inclusive environment where everyone is able to expresses their full potential.

What is your favorite experience at Disneyland Paris?

Without hesitation, Mickey and the Magician. It was the first show I worked on as Executive Producer at Disneyland Paris. It will always hold a special place for me. I recall all the great work done and the partnering and collaboration with the various teams. The show’s success with the Guests and the award it received* are my best rewards.

* Best Theatre Production Award in the category of parks with more than three million visitors at the IAAPA Brass Ring Awards.