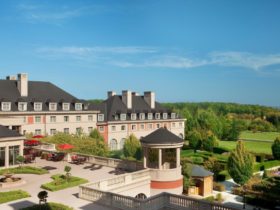 On Friday, November19, we were invited to a screening of the latest Disney Studios film: Encanto. Discover our review.

Where we could have expected a pale copy of the film Coco, Encanto has managed to revive the magic of the latter while offering us a new story just as pleasant.
The plot is accompanied by a catchy and catchy music, just like the usual Disney productions.
These elements, along with the enchanting visuals and the flamboyant color palette, make for a film in which all emotions seem to mingle.

There is no miracle recipe for being a happy family: communicate and share your feelings!
We have the chance to discover (still with music) the endearing members of this fantastic family who, despite their unique gifts, will themselves jeopardize this precious miracle that is their heritage.
Since the film focuses on the family, it is interesting to note that there are no antagonists, which is quite rare in the Disney film universe.

The magic of the script

The only negative point to note is that some questions remain unanswered and could be considered as scenaristic facilities to advance the plot.

In spite of this last point which will disturb the most sensitive to the plot, this sixtieth Disney animation classic will make the whole family travel throughout its 1h39 rhythmic and colored in the heart of Colombia.