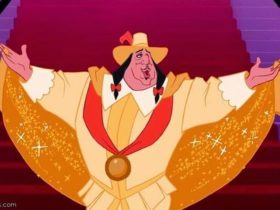 There is nothing like a good fire burning in the fireplace on the evening of December 24th to warm  you, gather together and eagerly wait for Santa Claus to come. At Disneyland Paris, there is no shortage of fireplaces and each one tells a story. Let’s take a look at some of them…

On this turn-of-the-century street, if some shops like the Cable Car Bake Shop or the Market House Deli have become somewhat modern with a wood-burning stove, others have remained faithful to the good old fireplace, like at Victoria’s Home Style Restaurant or Lilly’s Boutique. At Walt’s – an American Restaurant, the fireplace located in the lounge makes reference to Discoveryland and is Imagineer Eddie Sotto’s original creation. He was inspired by a fireplace designed by Alphonse Mucha, a figurehead of Art Nouveau, situated in the Fouquet jewelry store located at the Carnavalet Museum in Paris. The artist’s choice fits perfectly with the theme of this room dedicated to Jules Verne. Sculpted in amazonian walnut, it is crowned by an armillary sphere making reference to the novel “From the Earth to the Moon”. Within this sphere is a model of the Nautilus created by Tom Sherman, the artistic director of the attraction Les Mystères du Nautilus .

In Mickey’s Lounge, the victorian style is omnipresent with its massive fireplace combining wood and marble, tempered by floral motifs. A bust pays homage to the inspirer of Disneyland Paris, while the Holmes Stereoscope placed next to it, is a typical souvenir of this era. This small handheld device for viewing photos in 3D was invented in the second half of the 19th century, and was very popular until the beginning of the 20th century, at the time of Walt’s birth.

Winters can be harsh in the Old West, and Thunder Mesa residents know that. Old Joe, the lonely prospector from Big Thunder Mountain and the owners of Thunder Mesa Mercantile heat their homes via wood-burning stoves. So they head to Phantom Manor to find fireplaces and their presence can be surmised from the chimney stacks that protrude from the manor’s roof.  The massive, dark fireplace in the ballroom is decorated to reflect the splendour of the room, a reminder of a golden age gone by. Meanwhile the flames dancing in the fireplace emit a disturbing green glow that leave no doubt about the supernatural powers of the place. As for that of the Boudoir, the flickering light of its fire reveal strange shapes, the mantle and andirons, grimacing faces and menacing looks.

More modest are the fireplaces of the Cowboy Cookout Barbecue and Fuente del Oro Restaurante venues. The first is a fireplace in the full sense of the word, with the guests of Cottonwood Creek Ranch gathering around it. A stone base and corrugated iron duct radiate heat, perhaps using poplar wood, otherwise known as “Cottonwood” meant to grow in the vicinity of this barn.

Then, in Fuente del Oro Restaurante, the fireplace is more discreet. Although it may have worked during the gold rush days, today it is a decorative element in one of the restaurant’s rooms, recognizable by its curved mantle which can still be found in the Southwestern areas of the United States, from New Mexico to Colorado.

Even if it is never that cold in the Caribbean, pirates never say “no” to a good little bonfire! It was also deliberately added by the Imagineers who conceived the Park so as to bring a warm and pleasant aspect to the surroundings during the cold season.

At Captain Jack’s restaurant, just after the guests enter, the fireplace greets us. Its iron seahorse-shaped andirons remind us that this is indeed a sailors’ tavern, while on its mantle, a model of a ship of the era is proudly displayed. Not far from there, Le Coffre du Capitaine store also has a fireplace and a model of a ship but the the fireplace’s screen is quite different: Far from Captain Jack’s peaceful motifs, it features an impressive skull adorned with two pirate swords. No doubt, we’ve crossed sides, over to the pirates from Treasure Island, the 1950 Disney movie which inspired how the entire store was decorated.

But perhaps Adventureland’s most impressive fireplace is Colonel Hathi’s Pizza Outpost, where explorers from all over the world are used to having a meal before setting out on new adventures. Considering the size of the restaurant, a large fireplace was needed. It sits majestically against one of the “map room” walls, to the left of the main entrance. The fireplace is composed stones and its color is reminiscent of the rocks around the building suggesting that these served for its construction. As for its imposing wrought-iron lattice, the letters “EC” are featured in the center, evoking the  restaurant’s name prior to 1994, the “Explorers Club”. Lastly, a huge map of the world is engraved on the glass partition, around which adventurers can gather to share their memories of expeditions across the globe.

In the most joyful of all kingdoms, fireplaces are flourishing. In Sleeping Beauty’s Castle alone, there is one in The Castle Gallery, where spinning wheels forbidden by King Stephen burn, one in The Castle Shop, inspired by the famous “I dream of it” sequence from the 1959 classic, and a more rustic one at Merlin L’Enchanteur’s shop, just before the staircase leading to The Dragon’s Lair, with owls, a collection of butterflies and other curiosities reminiscent of the magician’s world.

L’Auberge de Cendrillion has two fireplaces. The first one, Renaissance style, occupies the largest room and in its mantle displays an exquisite sculpture of the famous Princess’s carriage. The second, with its classical style, has the peculiarity of being open, providing light and warmth for two separate rooms.

As for Toad Hall Restaurant, true to the excessiveness of its owner, Crapaud Baron Têtard, it has no less than seven chimneys proudly protruding from its brown shingle roof. Inside the game room hanging above the red brick fireplace is a painting that uses the “polishing” technique (like the stained glass window overlooking the entrance to Sleeping Beauty’s Castle) which allows the painting’s subject to change regularly. Here is our megalomaniac baron represented as the Laughing Knight by Frans Hals, Van Gogh and even as Mona Lisa! Yet, our jovial egocentric baron has made room for his friends: The pilasters are, in fact, decorated with two statues, those of Mr. Rat and Mr. Mole.

And let’s not forget the lovely fireplace by Gepetto in Pinocchio’s Fantastic Journey, with its automatons created by the sculptor, the thatched cottage in the Snow White and the Seven Dwarves attraction, where its warmth dries the socks of our merry miners, and La Confiserie des Trois Fées, just opposite the entrance.  Keep your eyes open because that’s where Flora, Fauna and Pâquerette are hiding!

Disneyland Paris has fireplaces beyond Disneyland Park. They can also be found in the Walt Disney Studios Park.

In The Twilight Zone Tower of Terror, no one can miss the hearth that majestically stands at the back of the Lobby and that alone, tells the story of this busy place. Its gigantic proportions and its huge tapestry with the hotel logo are a testament to the opulence of the place in its hour of glory. As for the geometrical patterns of the fireplace symbolizing arrows and the sun, they inevitably evoke the Pueblo Deco style, a mixture of Art Deco and Native American art very popular in California in the 1920s. Finally, the decrepit wall bears the obvious trace that something terrible happened, something that stopped the frenzy that once animated the hotel. But to find out more, you’ll need to go through the gates of the Twilight Zone…

In a Disney hotel, the warmth of the welcome is not only the smile of our Cast Members. It also shines through via the decoration and the way it is brought to life. That’s why you’ll also find fireplaces in the lobbies of Disney’s Hotel Cheyenne and Disney’s Davy Crockett Ranch – made of stone, just as it would have been back in days of the Pioneers!

The Disneyland Hotel has several fireplaces, but the one in the lobby is particularly noteworthy : Luxurious and opulent, using noble materials such as marble, and crowned by a superb painting conceived by the Imagineer Frank Armitage (who had himself portrayed in attire from the era) sitting on a bench in the foreground), this attests to the hotel’s importance in the history and prosperity of Main Street, U.S.A. The history of the Land, Main Street U.S.A., is inspired by the history of Coney Island near New York City (mentioned in the Land’s background music by way of the song “Goodbye My Coney Island Baby”) and Coronado near San Diego (where the Hotel Del Coronado served as an inspiration for the Disneyland Hotel). The arrival of the train as a means of transport allowed for the development of tourism and the local economy.

We end our trip with one of the most emblematic fireplaces in Disneyland Paris, Disney’s Sequoia Lodge, inspired by the famous architect Frank Lloyd Wright, the main protagonist of the “Prairie” style (Prairie School), favoring traditional materials such as stone and wood combined with simple geometric forms and a simple, elegant design. This open fireplace, in the heart of the Redwood Bar and Lounge also reminds us of the Hollyhock House, a splendid Californian house listed as a UNESCO World Heritage Site, designed by the same Wright. This fireplace brings a warmth and friendliness that, after a beautiful day in our Theme Parks, causes it to be one of the most appreciated meeting points in our destination.

With all these fireplaces, Santa Claus will definitely not be short of choices!