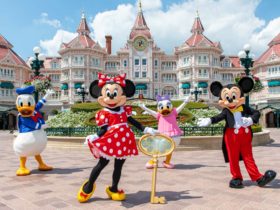 Reopening of Disneyland Paris, our opinions.

Published by Disney Interactive and developed by Gameloft, Disney Dreamlight Valley is a life simulation video game based on the Disney universe. Released in advance on 6 September 2022, it will undergo numerous updates before finally being completed in 2023.

After creating your character, you follow him/her on a dreamlike adventure. From a place full of memories, he is transported to a fantasy village overlooked by an elegant castle: Dreamlight Valley. The valley was submerged long ago by the Oblivion. This plague has struck all the villagers with amnesia and invaded the place with thorns charged with dark magic. Your character’s role is to restore order and memories to all the inhabitants of Dreamlight Valley.

The different areas of the village

The village is composed of several areas to unlock and explore:

Your character has several tools in his possession: a watering can, a shovel, a fishing rod, a pickaxe and a camera. These accessories will allow you to :

The food harvest will allow you to create many dishes by combining the various ingredients. It is up to you to deduce the recipes when they are not given!

The Scrooge shop will give you access to many items: decorative accessories, furniture and clothes to personalise your character and your home.

You can interact with the Disney characters in the village to increase your friendship level. There are also many quests that will allow you to become more connected.

Our opinion in brief: top and bottom

The top of Disney Dreamlight Valley: