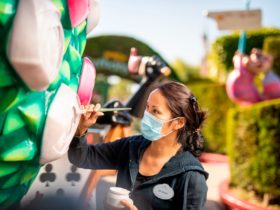 Makeup designs are instrumental when creating the magic of shows and parades at Disneyland Paris. Cosmetology designer Nicolas Cueff tells us about his job and work on Disney’s Halloween Festival.

How did you become a cosmetology designer at Disneyland Paris?

I always dreamed about working in the entertainment industry. Originally, I trained as a hairdresser and makeup artist, and then I decided to specialize as a hairstylist. At the end of my studies, one of my teachers who used to work at Disneyland Paris suggested that I apply, and I got my first contract three weeks later! It was for the 2004 Halloween season. It was very impressive, because it’s a particularly intense season for makeup artists. We had to do hair and makeup for so many performers. Some makeup designs require the use of prosthetics and very specific skills. Fortunately, I was able to rely on my team. I learned a lot during this time. I spent more than 10 years in the Cosmetology department, and I did hair and makeup for most shows and parades featured in the parks. Then, 3 years ago, our leadership team decided it would be interesting to start a department with designers specialized in hair and makeup just like costumes and sets, and that idea gave rise to the Creative Cosmetology department where I now work as a makeup, hair and wig designer. It was just two of us when we first opened the department, and now we’re a team of three. The first project I worked on as part of this new role was the Festival of Pirates and Princesses, followed by The Lion King and Jungle Festival which required a lot of makeup work.

Can you describe your job?

First, you have to create what the makeup is going to look like. Once it’s approved, you come up with a technical sheet that includes the different products to be used for each design and where they should be applied on the face to help support the work of our makeup artists in the field. We facilitate trainings so they can practice and have a full grasp of each design. This also helps us understand how long the makeup process takes. Some performers can do their own makeup. We have to train them too. After the show is officially launched, we provide support to the team of makeup artists. Makeup is not an exact science. Two different people can work on the same design and never get the same result. We just have to make sure that the original design is fully there, throughout the entire process. Finally, another part of our job is to constantly assess and order makeup products and wigs necessary for our seasons and shows.

How do you create an original makeup design?

It always starts with a piece of paper and pencils. I always carry colored pencils with me, and I usually need to put my ideas on paper first, whether it be the color palette or what it’s going to look like. Soon after, I practice on a human model as working on shapes and volumes inspires me so much. Finally, for technical sheets, I work with computer graphics designers to be as accurate and detailed as possible.

I tend to get inspired by Disney animated movies. Show directors also tell me what they want: colors, materials to create sets and more. All of this gives you an idea of what the show is going to be like. And then, I meet up with costume designers to decide the way in which makeup can become an integral part of the performers’ outfits.

How would you describe Disney’s Halloween Festival?

There are several themes. On one side, Fall, with brown, orange or pumpkin tones, and on the other side, fright, with dark colors. Ursula and her eels also make surprise appearances, which give the impression that we are in the ocean.

What are the most iconic creations in this year’s Festival?

There will be so many different surprises this season. Get ready and keep your eyes wide open! You might just see a puzzling float or animation at any given time. To me, one of the most iconic creations I came up with a few years ago is the character we fondly call “Raven Girl.” It’s a very mysterious role, even more so as she hides in a tree. She is dressed in cold colors, like her lace hat, so we went with black and khaki green. As the hat covers the top part of her face, the show director asked me to create an original makeup design for the lower part. I got inspired both by the float and costume and imagined roots creeping up on her chin and jaw.

This mix recalls The Forest of Enchantment: A Disney Musical, which you also worked on. How did this previous experience help you with Disney’s Halloween Festival?

The Forest of Enchantment was a great creative project which helped me develop numerous skills I still use to this day. It was the very first time I had so many makeup designs to create, on so many different themes like fauna and flora. This experience helped me create the makeup design for “Raven Girl,” as both elements can be found in this character whose body is a tree and head is a raven standing on top of this tree. Hence the idea to have the lower part of the face covered with roots while the top part, with the beak and hat, represents the animal.

You mentioned Ursula’s sidekicks who will accompany her during her surprise appearances. How did you create their makeup designs?

We looked at the colors featured in their costumes, which remind of the ocean, and we imagined a makeup with different shades of blue while playing with shadows and lights. We also took a little bit of green from Flotsam and Jetsam. Show directors often have very specific ideas about the backstory of each character. For the dancers standing next to the two eels, we really wanted guests to forget that they are human beings. This made us want to create a makeup effect that distorts the face, with asymmetrical eyes. They really feel like creatures from another world. It’s just great to have so much freedom!

What is a “Disney makeup”?

It’s really a type of makeup meant for the stage! It needs to be over-the-top! It has to be very colorful and intense as it needs to be seen from afar and fully reflect the personality of the character. It also has to be an integral part of the show and create wonder for the guests. It’s the opposite of TV shows or certain movies where makeup has to remain discreet. At Disneyland Paris, we use makeup as an art form and we are proud of it!

Disney’s Halloween Festival is also a time when our guests can come with dramatic makeup looks. What are the new trends this year?

As everyone needs to wear a mask, I would recommend focusing on the eyes! It’s always nice to have a smokey eye effect for Halloween. Black eyeliner is always very effective!

What piece of advice would you give to those who dream to do what you do?

It’s a very technical job which you have to learn both in school and in the field. It requires a great deal of patience because it takes quite some time. Each face is different and a method which works great on one person will not necessarily work on another person. In addition, fashion is ever-changing so you have to be willing to adapt constantly. And, you have to love people. You can’t “just” do makeup. When you do someone’s hair and makeup, there needs to be a bond. You have to be a good listener and provide guidance while staying in your place. The makeup artists who’ve had the most successful careers are obviously great technicians, but they are also people who have outstanding interpersonal skills. That’s also what I love about my job!