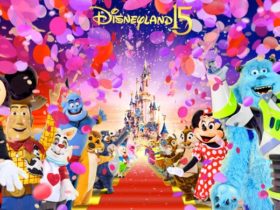 Lyrics – Just like we dreamed it – 15th anniversary of Disneyland Paris

On March 28, 1999 opened a new attraction at Disneyland Paris. In Honey, I shrunk the audience, visitors of the Imagination Insitute were reduced to Liliputian size, following a blunder by Professor Wayne Szalinski, a great inventor. We found promotional artifacts and visuals related to the opening of the attraction.

Honey, I shrunk the audience took the place of the Captain EO attraction at Discoveryland, but the former CinéMagique theater has undergone significant changes with in particular the addition of a jar platform, tactile sensations at the level of legs and face, and 381 speakers to spice up the experience. In fact, only the exterior walls of the old building have survived!

Below is a costume accessory worn by Cast Members officiating at the Imagination Institute.

This special edition watch was distributed to all Cast Members to celebrate the attraction’s opening.

The press kit and the invitation sent to journalists before the opening.

The inauguration of the attraction by the France football team, a few months after their World Cup victory!

Did you know ? In the making of the 4D film, we find Randal Kleiser, Hollywood veteran, who has notably to his credit the famous film “Grease”, but also the second part of the Szalinski trilogy, “Honey, I Blew Up the Kid” . He also called on the same score composer, Bruce Broughton, well known to Disney Parks (The Visionarium, Cinémagique, Spaceship Earth …)!