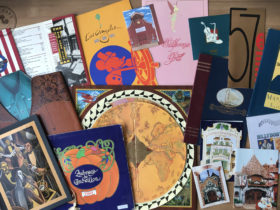 The actor who originated Captain Jack Sparrow for Disney has played the character 5 times and interpreted a whole host of characters, each more eccentric than the last! Here is a short biography of Johnny Depp.

Johnny Depp, real name John Christopher Depp II, was born on 9th June 1963 in Owensboro, Kentucky. His mother, Betty Sue Palmer, was a waitress and his father, John Christopher Sr., was an engineer. The family relocated to Florida but the divorce of his parents disrupted the young Johnny, who was 15 years old at the time. The electric guitar became his refuge. He founded a band, “The Flame”, later renamed “The Kids”, who opened for Iggy Pop at a concert. The band split two years later.

In 1983, Johnny was in a relationship with Lori Allison, a make-up artist, who introduced him to Nicolas Cage. A year later, he played Glen Lantz in the Wes Craen movie “Nightmare on Elm Street”. Now determined to break into the film industry, Johnny Depp trained as an actor at the Loft Studio in Los Angeles. But it was in 1987 that Johnny Depp really made a name for himself with his portrayal of Tom Hanson in the successful series “21 Jump Street”.

At the same time, Johnny made many other films with auteurs. His career spans around 50 roles.

In 2002, Disney offered him the role of Captain Jack Sparrow in the first part of “Pirates of the Caribbean” released in 2003. This role was a real success and was soon followed by the second and third installments of the series. This series also boosted the actor’s career.

The results of this last opus are lower than those hoped for by Disney and the actor’s recent setbacks have resulted in the Walt Disney Company’s refusal to continue its collaboration with Johnny Depp.