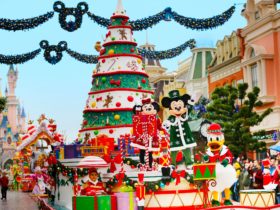 When Disneyland Paris begins to look a lot like Christmas

Allison began her career at Disneyland® Paris as an apprentice while completing her MBA in International Marketing & Communication Strategy. Six years later, she’s working on projects, each one more creative than the next… even during this closing period. Let’s sketch out her role!

Introduce us to your team and its missions.

In my department there are two groups: one dedicated to project management, which I am part of, and the other dedicated to creation. With the exception of advertising media*, we develop most of the Company’s “below the line” media. For example, we create key visuals and logos for the seasons, attractions, events or anniversaries, as well as photo and video shoots to highlight new products, or on-site communications. We collaborate with many different departments on a variety of projects! My team also guarantees that our brand image is respected by making sure that all communications developed internally or externally follow the Disneyland® Paris graphic and copyright guidelines as well as those of our franchises: MARVEL, Star WarsTM, Pixar, etc.

What projects are you currently working on during this temporary closure?

What’s a typical day for you?

Lots of calls and emails! In the morning, when my schedule permits it, I talk with each graphic designer that I work with so we are aligned on the day’s priorities. Then, I make a series of appointments on upcoming topics, preparing creative briefs and following up on current projects… all while teleworking.

Your advice to someone starting to telework?

Keep a steady pace! It can be tempting to work in your PJs from bed or to finish later in the evening. My advice is to set up a morning routine to start the day off right and not skip the lunch break. Ideally, turn off the computer and go out for a 15-minute walk. Speaking of computers…Put your camera on during your meetings! It’s good to see your colleagues. In my team, once a week we even organize a “virtual breakfast” to take our minds off things and stay connected.

Can you tell us about the best memory you have about a project?

The 25th Anniversary! We worked for months on this celebration, from the creation of the visual identity to the realization of the communication support on-site and throughout Europe. I had the chance to take part in the opening ceremony with speeches from leaders, shows, and even a concert by John Legend in front of Sleeping Beauty Castle at nightfall before Disney Illuminations… I had a front row seat, just a few meters from the stage!

I tested the Disney’s New York The Art of Marvel Hotel in Suite on June 21, 2021. And my disappointment ...

Disneyland Paris has just announced the end of free Fastpass in favour of a new system: Disney Premier Access. The ...