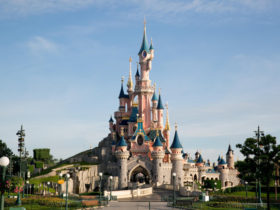 Is going to Disneyland Paris without entertainment worth it?

Disneyland Paris has its own hotel complex composed of 7 hotels, each identifiable by a different theme. A real icon, it is undoubtedly the hotel that makes people dream the most. I’m going to tell you today about my experience at the Disneyland Hotel!

Technical data of the Disneyland Hotel

Welcome to the Disneyland Hotel!

My little sister and I have always been fans of the Disney universe. We regularly visited our favourite park. Each time, we tried to book a different hotel in the resort. But the ultimate dream was to spend at least one night at the Disneyland Hotel!

In 2014, the website Voyage Privé gave us the opportunity. For €300 per person, we booked a stay in this hotel that we had been dreaming of!

In September of the same year, we left early one morning to spend a magical time once again.

After a journey punctuated by excitement and Disney music, we finally arrived. As we saw the directional signs to the parks and hotels, the excitement was building. Then we saw the roof of our next destination in the distance: this is it!

Like any Disney hotel, your reservation gives you access to the hotel’s car park. I looked for the entrance to the hotel to find a place to park. But there were barriers and the only open passage led us directly to the hotel entrance.

Confused at not having found the car park, my sister rolls down her window and asks the bellman at the door where we can park? The man, surprised, replies: “You park? But Madam, we’ll take care of parking our car!

Dumbfounded by her answer, we laughed for a moment at our question. We Breton sisters were not used to such kindness towards us.

Before taking the keys to my car, a second bellboy arrived with a trolley to take our luggage. Our small weekend bags looked ridiculous on the huge trolley but who cares, we were there and we intended to enjoy every moment!

Once through the automatic doors, we arrive in the hall. It is so grand! We admired the gilding, the decoration, the fireplace, the huge light fixture and the majestic staircase (if you like Victorian style of course).

When we arrived at the reception, a Cast Member welcomed us with a lot of kindness (at the same time, the opposite never happened to us, no matter which hotel we went to in Disneyland). He gave us the necessary information for our stay as well as our documents and entrance tickets. He describes the room we have been allocated and says: “The hotel has provided you with a room with a king size bed and a nice view of the gardens, will this suit you? “.

Of course, we wouldn’t have minded a view of the castle… But the price probably wouldn’t have been the same and we were so happy to be staying at this hotel that we said a big “yes” in unison.

We went up the grand staircase and turned left on the first floor. The door to our room was on the right. The number we had been given was 1234 (easy to remember!). Once opened, we pushed the door and there, what happiness: a spacious room, tastefully decorated where our king size bed with its headboard representing the castle was waiting for us, our luggage too, there was a small living room, a television with a mini bar more than well stocked (be careful with the prices all the same…), a large bathroom decorated on the theme of Fantasia, the remarkable view on the gardens as promised by the Cast Member: all this, just for us, for two days!

Our dream stay was off to a great start. Once we had checked in, we left the hotel and headed for the entrance to the parks in less than 5 minutes. What an advantage to be able to enjoy this proximity!

The day passes, as usual, we have had our fill of attractions and shows and we decide to go back to the hotel before going to see the night show in the Disneyland park.

As we were getting ready, we heard a knock on the door. What’s up? We weren’t expecting a visitor… A hotel employee introduced herself and asked us if we wanted our bed opened before we returned. Okay, it’s a luxury hotel, but we didn’t want to take advantage of the situation. We politely declined the lady’s offer and in return she gave us a large packet of chocolate coins featuring Disney characters.

After debating amongst ourselves about the crazy demands that the hotel staff were facing, we went back out to see the night show of the moment: Disney Dreams.

Once this was over, we walked up Main Street U.S.A. towards the hotel with stars in our eyes. While many visitors admired it with envy, we were lucky enough to stay there for the night and that added to the magic!

Back in our room, we admired the illuminated gardens and then went to bed in such a comfortable bed that we wished we hadn’t had to wake up the next day to enjoy it more. But a second day in dreamland awaited us!

The next morning, after a good shower with Hyacinth Hippo and his dancers (as a decoration on the shower walls, otherwise it would have been complicated to shower!), we went past the restaurants where some characters were welcoming the hotel residents: Bourriquet, Tic and Tac were the attraction. We went to the Inventions restaurant for breakfast (at the time it was included in the price of the reservation). It was a large buffet with lots of choice: sweet, savoury, there was something for everyone, and most importantly, everything was fresh unlike any other hotel in the destination we had stayed at. We had a table with a view on the park, with the Sleeping Beauty castle in the background: we couldn’t have dreamt of anything better!

After a quick trip to the second floor shop, our second day could begin and then we were off to the parks for more adventures to infinity and beyond!

The flagship of Disney Hotels

The Disneyland Hotel is a magical gateway to Disneyland Park. It is located between Main Street Station and Fantasia Gardens, which serves as the gardens, promenade and entrance to the theme park.

It is a majestic 5-star hotel in the Victorian style of the 1890s. It is the star of the resort’s seven hotels, representing luxury in the heart of magic.

The other hotels in the park did not have this privilege, and it is the work of the architects of Walt Disney Imagineering as well as architect Dana Aiken and the firm of Wimberley Allison Tong & Goo.

The hotel consists of three buildings: the central building, an east wing and a west wing (both U-shaped), all connected by walkways. The buildings are covered with a fairly strong rosewood coloured roof, enhanced by several octagonal turrets.

In order to stand out better against the European sky, it was decided that the facades would be pink, just like Sleeping Beauty’s castle.

At the top of the central building, there is one of the unmistakable symbols of this hotel: a clock with Mickey in its centre whose hands have been personified by his arms which tell us the time. Under this same building, on the ground floor, there are 64 ticket offices. They allow visitors to buy their tickets for the park(s), as well as two shops attached to the hotel.

The hotel occupies the upper floors from the first to the fourth. It consists of 496 rooms and 18 suites. The standard rooms are 34 m² and the suites range in size from 54 m² to 187 m².

Very few rooms have a view of the park. This opportunity is reserved for the top two floors of the central building, which consist mainly of suites and nine rooms.

The two most prestigious suites are :

The hotel also offers a wide range of services.

Within the hotel there is also an indoor swimming pool, a fitness and relaxation area with jacuzzi and hammam, a massage service on request, a gym and a garden, all located in the west wing. Since 2007, the Celestia Spa has been offering treatments and massages using Carita products (fee payable and by appointment). The area has been private for hotel residents since the opening of the second park in 2002.

While parents relax, children also have their own space: the Minnie Club welcomes them with the services of an animator depending on the day of your visit, a television corner and colouring workshops. For the older children, the Mad Hatter’s Game Arcade is available (for a fee).

When it comes to shopping, we are not left out: the hotel has a 90 m² shop called the Mickey Gallery located on the garden side in the south-east part of the building.

There are also the Plaza East and Plaza West shops located on either side of the entrance counters on the ground floor of the building. They are only accessible from the outside.

And finally, if you want to mix business with pleasure during your business trips or seminars, for example, the hotel offers meeting rooms (for a fee):

Have I made you want to book? Unfortunately, you’ll have to wait… The hotel is currently being renovated to give it a facelift before the park’s 30th anniversary in 2022.

I am sure that the reunion with this mythical hotel promises to be even more refined and sparkling, guaranteeing a truly unique experience with the incomparable Disney hospitality.

It is true that at this stage, access to the dream is a luxury that not everyone can afford. But I don’t regret having lived it, moreover, with my little sister who has since left us. This memory has become sacred in my mind! Even if the prices will surely increase with the current renovation, I don’t despair of returning one day. As they say: when you pray to your lucky stars, dreams always come true!

Marine in Wonderland
View More Posts
When Tinkerbell leaned over my cradle, she must have dropped a lot of pixie dust... because the magic of Disney never left me! I joined ED92 team to support and perpetuate this wonderful legacy that Walt Disney left us. Join me in the world of history, discovery and eternal fantasy...

Cruella is a film directed by Craig Gillespie and starring Emma Stone in the title role and Emma Thompson as ...

“My only true love, darling. I live for furs. I worship furs!” If we had to name a real fashion victim among the ...

As the opening of Disney’s Hotel New York – The Art of Marvel approaches, meet France, Housekeeping Manager at Disney’s ...

After months of yearning to visit Disneyland Paris again, some annual pass holders were already anxious that the annual pass ...