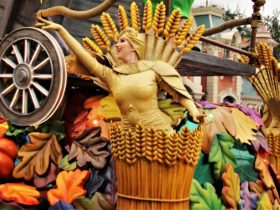 Mickey Mouse is the most emblematic character of the Disney company. No other fictional character is as world famous and recognized.