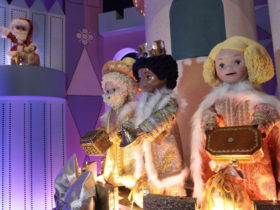 The last edition of the Disney Run Weekend took place in September 2019 and I was lucky enough to participate! Here’s a look back at my experience…

First, the choice of the race!

We were four adults who are used to running regularly: a couple of friends, my partner and myself. My friend and I being big fans of Disneyland Paris, our eyes started to shine when we heard about the Disney Run Weekend. It didn’t take us long to decide to take part!

We chose to run the 10 km. Indeed, this route allowed us to run through both parks. The 5km route was mainly in the Walt Disney Studios. We also booked 2 nights at the Disney Sequoia Lodge.

And it was going to be quite a fun experience because it is also one of the rare occasions when adults can go to Disneyland Paris in costume!

Our arrival at Disneyland Paris…

The 10 km race took place on Saturday morning at dawn, well before the park opened. Therefore, at the time of registration, it was compulsory to book a hotel night from Friday to Saturday. So we arrived on Friday afternoon to collect our numbers!

The distribution took place in the Disney Events Arena. Registration for the race was quite expensive (around 50 euros per person) but the price included a personalised race number, a t-shirt, a medal and a breakfast box received at the finish. After collecting our numbers and t-shirts, we were also able to visit the stand with various exclusive products in the race colours.

One area of the arena was also very popular: the runners’ wall! Each participant had his or her name on the wall and could take a photo of it! In short, as soon as we entered the arena, we were already immersed in the atmosphere of this exceptional race!

In the evening, the 5K race took place in the Walt Disney Studios and Disney Village. The theme of the race was The Lion King. Participants were able to have their photo taken with their favourite characters throughout the race.

So our race started on Saturday morning at dawn, well before the parks opened. There were so many participants (several thousand) that we were divided into boxes with different starting times.

As we had to be in our start box by 5.45am, we chose to have a very light breakfast at the hotel. The buffet was available much earlier than usual for the event and race participants were given a wristband to come back for a second, more substantial breakfast after the race. After this first snack, it was already time to put on our running clothes adapted for the occasion: Mickey for the men and Minnie for my friend and myself.

In the starting boxes, the atmosphere was provided by the hosts and the interviews of the participants were broadcasted on giant screens. Fortunately they were there because the wait was a bit long and it was not very hot… Finally, it was our turn! The excitement was at its peak!

We walked through the Disney Village, then through the Fantasia Garden before passing under the Disneyland Hotel and entering Disneyland Park. Along Main Street, the Cast Members were waving and cheering us on! The race lived up to its promise. Indeed, it was a magical moment to run in front of the castle accompanied by the other participants in sometimes completely crazy costumes!

The theme of the 10km was Disney princesses, so we could have our photos taken with them along the route. We had the choice between photos taken with our cameras or a special PhotoPass with the official Disneyland Paris photographers.

After running through all the lands of Disneyland Park, we continued our journey behind the scenes before reaching the finish line in the Walt Disney Studios.

The course was not particularly technical. However, due to the number of participants and the many photo stops, the usual running pace was “broken”. Fortunately, there was no timing. The half marathon on Sunday morning was the only timed race of the weekend.

The end of the race…

Mickey and Minnie in their running gear were the stars of the finish line. As soon as we crossed the finish line, we received our Rapunzel medal and our breakfast box (which we saved for later as our second breakfast was waiting for us at the hotel).

After a good shower and a real breakfast, the classic day in the parks could start. It was nice to see all the Guests proudly wearing their medal(s) around their necks all day! However, by the evening we were exhausted… Our legs couldn’t take it anymore after the 10 km run followed by about 15-20 km in the parks, the village… but in our eyes the stars of this unique day were shining!

As soon as our stay was over, we had only one thing on our minds: to register for the next edition of the Disney Run Weekend!

The positives of the 2019 edition of Disney Run Weekend:

For information and registration for the various Disney Run events: https://www.rundisney.com/