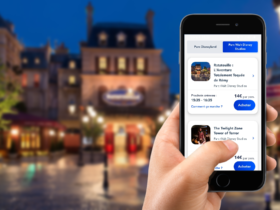 In order for the legend of Phantom Manor to live on through the mansion and its iconic characters, the concept and all that revolves around the attraction had to be created.

Immerse yourself in the spectacular work of the Imagineers.

Frontierland is a place of myth and legend, but no story is as mystical as that of Phantom Manor.

To unravel the mystery of this house, you must first pass through what appears to be the remains of the garden. A large gate and wrought iron gates lead you through. Then, a path leads you through the vegetation that has not been cared for for centuries. A few statues that have become green with age punctuate the path here and there. The sound of a shutter slamming breaks the surrounding silence. Large windows overlook the garden. Are we being observed? A strange climate reigns, the atmosphere is heavy.

Just before the entrance, you have to continue under a long portico made of wood, where a cold wind can sometimes blow. Finally, the door of the manor appears. It is huge, made of dark wood, reminding the dark facades of the house, and it is decorated with two golden knockers.

No need to use them, a bellman opens the door for us without us having to knock. Did someone tell the master of the house about our arrival?

By the time we ask this question, the butler leads us into the hallway and has already closed the huge door behind us.

The place is dark and gloomy. The time to examine for a moment the place and the objects which surround us, the servant makes us sign to enter the elevator, also called “Stretch Room”. Once again, the doors close on us.

The deep voice of the narrator accompanies our descent. Is it the Phantom? We can see paintings appearing which lengthen and which let guess a fatal outcome to the represented characters. Who are they? Do they live in seclusion? Let’s hope we don’t suffer the same fate…

Suddenly, a thunderclap bursts and plunges us for a few moments into total darkness: the narrator’s demonic laughter echoes throughout the room!

Doesn’t that laugh sound familiar? It is that of Vincent Price, known for having lent his voice in horror films, but also at the end of the clip “Thriller” of Michael Jackson. The French voice in the attraction is that of Gérard Chevalier who has often dubbed him.

When the doors of the elevator finally open, we have a few steps to take, which gives us time to observe the paintings that change as we pass by, against a backdrop of melancholic and troubled music.

It is then that we can embark in the “Doom Buggies” (vehicles on board of which we must continue the visit). Helplessly, we let ourselves be guided, only they know the way through the mansion, and with a little luck the way out.

I warn you, during your journey, you may well observe strange phenomena or make some impromptu encounters… who knows what may happen and who may still inhabit this cursed place?

Relive the history of the Phantom and how it was integrated into the attraction by the Imagineers. The mythical scenes of the ride are also described (Price: 19,99€).

In Disney parks around the world, everyone has their own version of the haunted house and fans have a cult following. But no version is quite like the Phantom Manor. Both dark and tragic, this attraction is full of details about this macabre romantic story. Everyone enjoys tracking down every clue that allows visitors to take part in this ghostly adventure.

If you want to learn more, discover the technical data and the legend of the attraction!