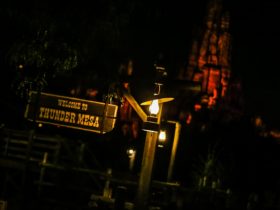 For Walt Disney, railways are – above all – a family affair.

During his youth, his father, Elias Disney, was a machinist in a railway maintenance workshop then a carpenter during the construction of the Union Pacific Railway Line linking Ellis, Kansas, to Denver, Colorado, where he crossed paths with a certain Buffalo Bill.

The small town of Marceline, where the Disney family settled in 1906, owes its existence and growth to the Santa Fe line which then linked Fort Madison to Kansas City – a story not unlike that of Main Street, U.S.A. – and upon which his uncle, Mike Martin, worked as a mechanic. Between trips, he used to tell young Walt about the history of the railroad, especially that of Casey Jones, the exemplary locomotive engineer who saved all of his passengers from a terrible train collision in 1900. It was from this story that Walt created the character “Casey Jr.” and the short film, The Brave Engineer, released in 1950.

In 1917, Walt himself worked as a “News Butcher” on several train lines, selling magazines, fruit, candy and other beverages to passengers. This experience greatly enhanced his experience and imagination, while learning the basics of his uncle’s trade and discovering no less than half a dozen U.S. states. He used these memories in several of his films such as Mickey’s Choo-Choo, Dumbo (1941), Danny, So Dear to My Heart (1948) and The Great Locomotive Chase (1956).

Walt shared his passion with several Studio members, including legendary animator Ward Kimball, with whom he travelled more than halfway across America to visit the Chicago Railway Show in 1948. There was also animator Ollie Johnston (Mr. Smee, Sir Hiss, and many other mythical characters) and machinist Roger E. Broggie, who accompanied Walt in designing Carolwood Pacific – the model train he had built on his Holmby Hills property – pre-designing what would be the Disneyland Railroad in Anaheim five years later.

However, before this iconic attraction became a reality, Walt launched two other train-related projects that, while they never saw the light of day, had a significant influence. On August 31, 1948, just a few days after returning from the Chicago show, he wrote a famous memo laying the groundwork for a “Mickey Mouse Park,” a sort of preliminary vision of what would be “Disneyland” where the main section already included a train station. Soon after, he conceived a series of 24 animated models of American folklore and heritage to be transported across the country in a train, with every wagon dedicated to a different region of the U.S. and its history.

All of these elements can be found in various Disney Parks and especially at Disneyland Paris. Yet it’s not just Walt whose life has been marked by the railway. Mickey has too! In fact, it was on a train in 1928 from New York to Los Angeles that Walt imagined the mouse that started it all!