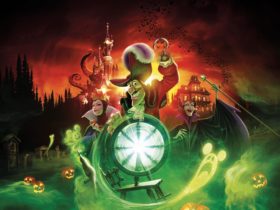 The Twilight Zone Tower of Terror™ is a true icon of the Walt Disney Studios park and is as frightening as it is fascinating… Strange phenomena have occurred there and keep the mystery surrounding this hotel alive. It is said that people have disappeared in an enigmatic way and are trapped in parallel worlds. Would you dare to follow me into the fifth dimension?

Welcome to the Hollywood Tower Hotel!

While strolling through Walt Disney Studios Park, you can’t miss the huge building that houses the Hollywood Tower Hotel, which seems abandoned, unlike the rest of the park, which is alive and well.

In vogue in the 1920s, the hotel was designed in a Pueblo Deco style, a mixture of South American art and Art Deco. Unfortunately, the façade has lost its beauty and has been damaged by an unknown phenomenon…

To take advantage of the reservation made on your behalf, the most courageous will pass through the wrought iron gate. They will then have to cross the faded looking garden.

To the background of slightly hoarse jazzy music, you then enter a huge, dusty and deserted lobby, as if frozen in time. A newspaper dated 31 October 1939, probably forgotten by one of the visitors, and the clocks that have stopped between 8.05 and 8.06 p.m., bear witness to this.

Curiosity will lead you to a small library where a strange atmosphere prevails. A flash of lightning plunges the room into darkness for a moment. Suddenly, a television set comes to life, the writer Rod Serling welcomes you and explains that things are about to get much more exciting for you, as you are about to take a trip to another dimension.

What’s all this about dimensions, you might ask? Well, keep your wits about you, because a secret passageway opens up and your visit continues amidst a mechanical din. It’s mechanical and steamy noises emanating from the hotel’s poorly maintained boiler room.

Did you hear anything? In the distance, it sounds like a little girl calling for help…

Good! To reach your room, you will now have to use the service lifts that are still in working order. Once inside, make sure you are properly strapped in and hold on to whatever you can: glasses, hat, neighbour’s hand, breakfast… because your journey into the fifth dimension is not going to be easy!

Soon the lift closes its doors and rises to the upper floors. The cinematic begins, you hear strange metallic noises and the sound of cables about to snap. Weren’t you ready? You’re too late…

Next time you book into an abandoned hotel in the dark side of Hollywood, be sure to specify how long you’re staying, or you risk becoming permanent residents… of the fifth dimension!

Did you enjoy your trip and want to know more? Click here to go behind the scenes of this infernal tower!