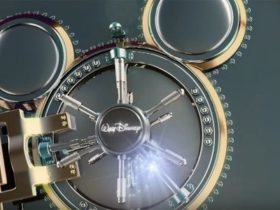 Today let us introduce you to Aurore, mostly known by French fans by the pseudonym Pixietubeuse!

Aurore, can you introduce yourself to those who don’t know you, especially the international fans?

My name is Aurore, but I am mostly known by the pseudo Pixietubeuse 🙂 I have been a Disney fan since my childhood and have been posting content on the Disney universe since 2016. I mainly love sharing my videos on Youtube or Instagram about my Disney parks trips, my tips on Disney fashion (and show my 1001 purchases lol) and share my favorite art-of books!

When and how did you get started on Youtube?

My best friend had been pushing me for several months to launch a channel on Youtube because she thought I had a “personality for it”, but from my point of view, I was not sure what value I could bring to the platform. In February 2016, I went for the first time to Walt Disney World, my first foreign park, just by myself, a little girl’s dream that was finally coming true! When I left Hollywood Studios, I realized that I could have shared my adventure, my advice to other people and that I would have loved to film this unique trip. Well, it was a little too late at the end of the stay, but I have made up for it since! I also followed a lot of Disney content on the forums, but I had a lot of trouble reaching out to others and sharing, probably out of shyness. Creating my channel was an opportunity to have my own voice and especially to talk about subjects that interested me because at the time, there was no video content on the “Disneybound” or the Disney books in France. .. I really didn’t expect so many of us to be interested in it!

What is your relationship with Disneyland Paris, how does your passion translate?

My parents immersed me when I was young in Disney magic by making me watch Disney movies, but also by taking me to the park when I was three years old. I associate the park with a lot of good childhood memories, but also with all those magical moments that followed in adolescence and in adulthood. Even today, the stars in my eyes continue to shine with each visit and like many other people I consider the park to be a refuge, a second home! I really like to soak up the general atmosphere of Disneyland Paris by strolling in the park, taking a tour of the shops, stopping for a snack, admiring a detail that I had never noticed before …  I feel like I still have a lot to see and right now I’m eating in restaurants that I haven’t done yet. It gives me the impression of rediscovering Disneyland Paris from another angle once again!

What do you love most about Disneyland Paris? What is your favorite show and attraction?

What I like the most is the magic that emerges in the smallest details of the park, the smile of the cast member who will make your experience unique to my obligatory passage by the Fantasia Gelati … And mainly when a new season starts at Disneyland Paris and there is plenty to see! On the show side, I have a hard time choosing between the Jungle Book Jive and the Halloween parade because both make me dance and shout the lyrics every time! I really like the dances and the interactions that we can have in Central Plaza, it really puts a great atmosphere among the visitors. My favorite attraction is Phantom Manor, I find it perfect in its small details and I love the idea that we have a storyline unique compared to other Haunted Mansion attractions. But I also love Buzz Lightyear Laser Blast for its interactive side, and for the pleasure of beating friends who want to try to face the intergalactic threat that I am!

Do you have your favorite memories about the resort?

I have a lot of them, and I’m sure I would have more if I didn’t have such Dory memory lol! I especially remember my sixth birthday, when my father took me and my mother to the Auberge de Cendrillon to celebrate the event. He slipped out at one point and came back with his arms loaded with autographs with words from all the characters, making me believe he had them signed on the parade … It took me many years to understand that he had done everything himself, but this day remained etched in my memory! A little more recently, I remember all the emotion I felt when I saw Disney Dreams! for the first time. I was also celebrating my twentieth birthday, it had been a few years since I had returned to the park and I was very moved to find all the characters who marked my childhood on the castle.

We saw that you had traveled to other resorts, can you tell us more?

I had the chance to go to Walt Disney World, Disneyland Resort, Tokyo Disneyland and the Disney Cruise Line, I only miss the Chinese parks! I did the majority of these trips going alone, and it was just magical.

What have these trips changed for you?

It allowed me to discover the differences between Disneyland Paris, which we know so well, and foreign parks, to compare our versions of the attractions and theirs, the specialties of each … It allowed me to learn more about the local culture, but also to have interactions that I would not necessarily have had on our Parisian resort because I was alone and outside my comfort zone, especially with the characters and cast members who really took time to chat with me. I also learned that no dream is impossible to achieve if you give yourself the means, which boosted my resourceful spirit and my desire to travel even more!

What has the InsidEars program done for you?

The program gave me access to opportunities that I never hoped I could one day experience and share in the community and offer different content and about the park, sometimes with a more “professional” point of view on Disneyland. Paris. It also allowed me to better understand behind the scenes of the park, in particular by visiting the workshops or working with the Shop Disneyland Paris teams on the occasion of the Halloween 2019 campaign. I am extremely grateful for the trust that is given to us as InsidEars, the legitimacy that is offered to us to be able to talk about our passion and the open-mindedness of the teams who allow us to have access to the backstage part, where we go better account of the work that can be behind all those things that we love about the resort.

Do you have a Disney collection? If so, can you tell us about it?

Well … I’m a real Disney fashion addict, but I’m making progress lol! Over time, I try to be a little more careful not to spread myself too thinly in my different collections and only buy the pieces that I really like, whether it’s fashion or collectibles. I really like having pins with the effigy of the characters whose looks I reproduce, and in the end it makes a real small collection! In reality, I would say that I have mostly a collection of books and art of in French and English since 2011, which I am very proud of.

Do you have a last word?

Thank you, quite simply!