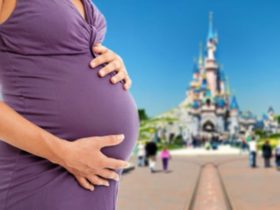 Staying at Disneyland Paris when pregnant

Alan Menken was born and raised in New Rochelle to a father who was a dentist (Norman Menken) and a mother who was a stage actress, singer and writer (Judy Menken). He also has a brother and sister, Kevin and Faye Menken.

At a young age, he developed a passion for music and played the piano and violin. After graduating from New York University with a degree in Liberal Arts, he decided to pursue a musical career. He joined the Lehman Engel Musical Theater Workshop at BMI and became a composer of songs that he performed in clubs.

In 1979, he participated in the development of God Bless you Mr. Rosewater, an off-Broadway play, with Howard Ashman. Composer on The Little Shop of Horrors in 1986, it is with him that Alan Menken receives three prestigious awards for musical comedy.

Spotted by Disney thanks to this, the duo joined the studios in 1987 to compose the music for The Little Mermaid. They continued almost immediately with Aladdin and Beauty and the Beast. However, caught by the disease, Ashman is carried away by AIDS in 1991 before having completed his work on Beauty and the Beast. He was succeeded by Tim Rice. His famous compositions on Pocahontas in 1995, The Hunchback of Notre Dame in 1996 and Hercules in 1997 followed.