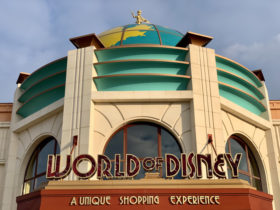 As part of itslongstanding social responsibility approach, Disneyland Paris has amplified charity efforts since March, in an effort to help those in need during this unprecedented time. This latest donation includes excess foodgivento branches of the Secours Populaire, Restos du Cœur and the Banque Alimentaire in theHauts-de-France region.

Today, Disneyland Paris pledged to donate more than 145,000 pizza meals over the coming months to non-profit organizations Restos du coeur, Secours Populaire and the Banque Alimentaire to support families in need throughout the Hauts-de-France region where the resort’s food product is stored. In addition, Disney VoluntEARS, the employee-volunteers at Disneyland Paris who give their free time to charity initiatives, will also be surprising the families with Disney-themed Christmas toys. With the support of the Hauts-de-France regional council, this initiative follows several other donations made by the resort throughout the year across France.

“As the holidays approach, the health crisis has multiplied the needs of our organization,” says Jean-Louis Callens, Secretary General of Secours Populaire du Nord. “Disneyland Paris’s Disney VoluntEARS have come to fill the bags of our own volunteers, the Green Santas, with pizza meals and toys that will bring smiles to the faces of thousands of children. They all know about Disneyland Paris, even those who haven’t had the chance to go. They are regularly welcomed at the Parks. This year it is Disneyland Paris that is coming to them.”

“Thanks to the strong relationships we have built with non-profits over the past decades, we are able to share the magic of Disney outside of the park at a time when it is needed the most,” says Eric Pirès Augère, Coordinator of the Disney VoluntEARS.

Since the beginning of the health crisis, Disneyland Paris has donated more than 7.7 million euros in food, protective equipment and medical supplies, as well as merchandise to non-profits, hospitals and local partners. Food items have included fruits and vegetables, proteins, snacks, dairy products, drinks, sweets and other delicacies.

These actions are part of Disneyland Paris’ social responsibility approach – in place since 1991 before its opening the following year – to support associations and neighboring local cities working with children and families and to protect the environment.