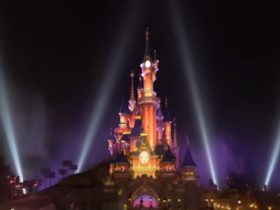 “30 years of dreams, adventures, laughter and memories: the magic is just beginning…” With these few words, Disneyland Paris kicked off its promotional campaign on 10 January 2022 by unveiling the first TV spot for its 30th anniversary. Once again, BETC agency is responsible for this advertising creation. We owe them the famous campaign “The Little Duck” featuring Donald released at Christmas 2018 or the 2019 Christmas spot “L’Elixir”. A 360° campaign will accompany the spot, which will be broadcast from 7 February in France. The festivities will begin on 6 March 2022.

The spot shows a little boy and his father who came to watch the parade in 1992. In front of this little boy’s amazed eyes, everything is suspended in space and time like a childhood memory of a magical moment.

The camera follows the little boy’s gaze and – in a roller coaster-like ride – takes us into the heart of the parade spectacle. We brush past Mickey’s hand as he greets the boy, pass through the flames of a seething Dragon, fly with Peter Pan, meet Timon and Pumba, take off into infinity and beyond with Buzz Lightyear, are swept along by the stream of bubbles in Nemo’s universe, spared by an arrow from Merida before reaching Elsa…

Through the different characters and universes, it is in fact 30 years of magic that we have just crossed in a few seconds. We also find the little boy from the beginning of the film. Now an adult, with the same look of wonder that he had as a child, he attends the parade with his little girl. As Iron Man passes through the sky, time resumes its course and the little girl in turn is dazzled by the magic to come. A magic that will never cease to grow and to be passed on from generation to generation (source: BETC agency).

First of all, in addition to the particularly elegant staging, the video also hints at some potential changes to come. This is notably the case for the Toy Story characters, who have been given a makeover for the occasion. Nothing very surprising, since it is usual that Disney heroes evolve over time. We had already presented these changes in 2021 at Hong Kong Disneyland.

Secondly, all regulars of the Disney Stars on Parade will also have noticed the replacement, at least in the video, of the last float. The one discovered at the 25th anniversary in 2017 is effectively absent. It is the one from the Frozen Celebration in 2020 that replaces it. Finally, Iron Man reminds us that the Avengers will be taking part in the celebration this year. The opening of their campus is scheduled for next summer at Walt Disney Studios.

Disneyland Paris will reveal more information about the 30th anniversary celebrations at the end of the month. Stay tuned!