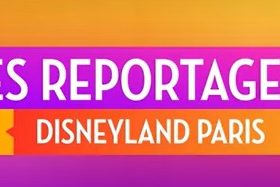 Behind the scenes of our attractions

There is only one Discoveryland in the world, and it’s at Disneyland Paris! Such a unique Land, with a vibrant tribute to the visionaries of the past and present… a particularly special ambiance was needed. Here’s a focus on the music….. original in more ways than one.

Discoveryland is not the Land of the future, or even of a future. It is the Land of futures, those envisioned by Jules Verne, H.G. Wells or even George Lucas, brought together as if at the World’s Fair. Through architecture and history, each attraction reflects a certain vision of the future, as one would imagine during the Renaissance with Orbitron, in the 19th century with Les Mystères du Nautilusand Space Mountain – From the Earth to the Moon, or as imagined today with Star Tours: The Adventures Continue.

Faced with such diverse futures, it was necessary to find a way to create a sense of unity for this ensemble. Background music, or BGM, was the ideal way to achieve this; but the task was not easy.

Generally speaking, background music in Disney Parks helps set the scene for each land. For Discoveryland, a more emotional approach was needed; one that embodied both the spirit of discovery, wonder and optimism that is unique to this Land.

In designing Discoveryland, Imagineer Tim Delaney first turned to the work of film composer Bernard Herrmann, and more specifically, to his scores for Journey to the Center of the Earth (1959) and The Day the Earth Stood Still (1951). He considered them to be the quintessential science fiction music. These pieces had a unique sonic effect, as if they belonged in another universe:  The former uses a novel ensemble of five organs, harps, percussion and brass instruments, and the latter uses a theremin, one of the first electronic instruments, which can emit strange sounds without being touched.

That being said, the Imagineers quickly realized that the very special nature of Discoveryland could not be limited by existing music and so, that is why they chose to have original music, conceived specifically for this Land. It was while searching in this direction that they discovered David Tolley, a young pianist and composer who was working in the field of film music and was interested in electronic music. His unique personality, his style being at the time both classic and modern, was a perfect fit for Discoveryland’s ambitions.

To capture the spirit and emotions of the place in his BGM, David Tolley was turned to the drawings and concepts and to certain words or expressions provided by the Imagineers working on Discoveryand…words such as “Discovery” or “Timeless”, found in some of the music titles. Imagineers also suggested ideas of flight and heroism, which can be found in film music, but also in the works of the Jules Verne era.

These influences can be heard in the very pianistic writing of Discoveryland’s music, echoing the second half of the 19th century’s French music. The classical style of the Heavenly Flight track, with its arpeggios and rockets, is reminiscent of Camille Saint-Saëns, and in particular the famous finale of his Carnival of the Animals. The more impressionistic style of Hilary’s Discovery evokes Claude Debussy (who also inspired the 20,000 Leagues Under the Sea film composer). As for A French’s Maiden Waltz, not without an additional touch of humor, we find the influence of Émile Waldteufel, “the French Strauss”, known for his famous Waltz of the The Iceskaters.

Another essential dimension of this music is its ” timelessness”, produced by its electronic sounds. Visually, Orbitron, (Discoveryland’s “weenie” at opening, prior to Space Mountain being built) is a clever blend of historical and modern constructions, combining Leonardo da Vinci-inspired architecture with neon lighting giving it that electric look. With this in mind, Discoveryland music revisits the classical style using a synthesizer, as Jean-Jacques Perrey did for the famous baroque music of the Main Street Electrical Parade and as did Wendy Carlos -composer of Tron- with the music of Bach, Beethoven or Rossini.

Thus, in Heavenly Flight, one of the Land’s most emblematic tracks, wonder takes a universal dimension, through these ethereal choirs and electronic bells. As for our passion for exploring, at the nucleus is Christafori’s Parade, with its floating sounds, and tempo seeming to follow the different phases of our journey on board Orbitron… beginning with the excitement of take-off as we contemplate our trip to the stars.