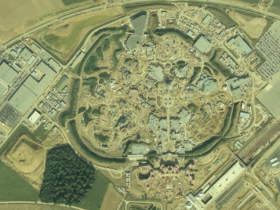 Disneyland Paris from the sky: The construction (1991)

An unavoidable part of the Disneyland park, Main Street U.S.A. opens the door to the Enchanted Kingdom and will seduce you with its incredible stores and details. Main Street U.S.A. is a land just like Fantasyland, Frontierland and others…

After passing the ticket office and Town Square, what a pleasure to be in Main Street U.S.A., to discover its thematic stores but also its little secrets…

Welcome to Main Street U.S.A., the entrance to the Enchanted Kingdom!

Main Street U.S.A. is the replica of the main street of a small American town, Marceline. Located in Missouri, it is where Walt Elias Disney lived at the beginning of the 20th century. This street quickly became the lungs of the city. Over time, thanks to technological innovations (such as radio and electricity), the precarious dwellings gave way to buildings constructed in hardwood and to a neat architecture. In the 19th and 20th centuries, this street was transformed with the arrival of various manufactured products.

This period was a turning point for the United States. It symbolized the period of Walt Disney’s idealized youth.

Nostalgia is present in Main Street U.S.A. Indeed, it reflects very well the charm of this era tinged with Victorian elements. It moves visitors with its architecture, the fashion of dress and the life of the inhabitants of this period.

Main Street U.S.A. is full of subtle and infinite little details. As many winks to the creators and imagineers as to the actors who filmed for Disney. Look up and look around!

Different aspects of this street underline a particular scenaristic will. Disney leaves nothing to chance. The windows of the lowered storefronts allow the youngest visitors to see inside. The red paving stones of the sidewalks reinforce the green spaces (opposite colors).

This famous main street is also built on the technique of forced perspective, created by the image makers.

This technique is applied to the buildings located at the end of the street, closest to the castle, to give the illusion of a longer street. The windows become narrower as the floors go up to obtain an even more realistic look.

Main Street consists of four roughly equal “blocks” separated by Main Street and two cul-de-sacs. The first part of the street is mostly stores, while the second part has restaurants and some boutiques. The latter have an entrance on the street, as well as another in the galleries I mention below.

On a light retro air, you will stroll there pleasantly!

To the left of Main Street is the Liberty Arcade, themed around the Statue of Liberty. To the right is the Discovery Arcade themed around various retro-futuristic discoveries. If you follow the latter, your path out to the right will take you directly to Discoveryland.

This gallery is beautiful because of its covered cast iron design and gaslighting. Numerous display cases showcase old photos and drawings illustrating the birth and construction of the Statue of Liberty. These two references evoke the history and collaboration between France and the United States of America. You can even witness the christening of the statue on a mythical painting.

This pleasant gas-lit gallery pays tribute to the ideas and inventions of visionaries. There are also amazing posters and display cases filled with retro-futuristic devices. The structure is made of wood and wrought iron painted green.

Finally, this famous street will begin to immerse you in enchantment. It will lead you with wonder to the Sleeping Beauty Castle.