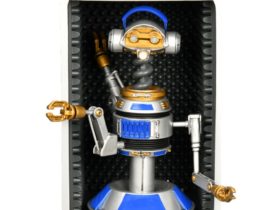 Following a first tease last week, today we’re happy to share more details on Cars Route 66 Road Trip which is set to debut in 2021 at Walt Disney Studios Park. The long-standing and great collaboration between Disney Imagineers and Pixar continues — together, they’ve designed a family-friendly journey, discovering some of the wacky roadside attractions along the famous Route 66 highway.

The attraction’s new boarding station, inspired by mid-century modern architecture, fittingly offers several nods to the automotive world. As your gateway to all the wonders awaiting you on Route 66, guests will enter the station through a tourist booth complete with maps, postcards and other decorative items (design details that Pixar Animation Studios and Walt Disney Imagineering are known for and guests love – see examples below).The loading station, which stands halfway through construction, is actually the first building constructed outside the current perimeter of Walt Disney Studios Park, and once completed will be accessible to visitors via a new road extending from Toy Story Playland. Cars Route 66 Road Trip represents the first step in the expansion of Walt Disney Studios Park.

Stay tuned for more information about this attraction that we will share soon!

Check out  “Rendez-vous Magiques”, new benefits at Disneyland Paris: Each “Rendez-Vous Magiques” will address a theme that will allow you to ...