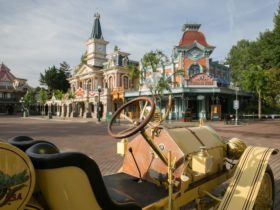 On February 5, 1953, Peter Pan was released on American movie screens and flew to success. Let’s celebrate this anniversary together by following Peter Pan and his friends through the history of Disneyland Paris…

Located northwest of Fantasyland – not far from the Adventureland gate leading to Pirates of the Caribbean – Peter Pan’s Flight is a link to our childhood dreams when we longed for adventure. The concept was originally created for Disneyland Resort in 1955 and was Walt’s favorite dark-ride attraction. He loved the new, immersive concept of a flight from London to Neverland, magnified by magical black lighting. In fact, this type of scenic route in the dark lends itself particularly well to the journey, as the nocturnal atmosphere is reminiscent of the starry evening when the Darling children meet Peter Pan and fly with him to Neverland.

Let’s continue our journey to Adventure Isle, with its imposing 12-meter-high Skull Rock dominating Cannonball Cove, a nod to the place where Peter Pan came to the rescue of Tiger Lily in the film. Guests can enter the skull and watch their surroundings from the mouth or eyes without being seen. It must be said that the place is still not reassuring, especially since two lanterns replacing the eyes give this skull a scary look …

As for the impressive Pirates’ Galleon anchored in the cove, it has been the scene of Peter Pan’s exploits many times in various shows reviving the film’s greatest scenes.

Disneyland Paris’s artistic teams are always particularly attentive in respecting the classic film. Show director Emanuel Lenormand said: “When I wrote Peter Pan to the Rescue for Adventureland in 2004, I spent hours watching the adventures of Peter Pan and Captain Hook, immersing myself in their dialogues so my show would mirror the film and the image people have of it as much as possible.”

Among the film’s admirers, art and history enthusiasts can appreciate the sets and graphics exhibited in both the Fantasyland room at Walt’s – An American Restaurant and in the showcase dedicated to designing the characters, in this case Tinkerbell at Animation Celebration.

Other favorite characters from the film have been seen in various Disneyland Paris parades, including Disney Parade (1992), Disney Stars on Parade (2017), and Disney Dreams Parade (2007), where the Fantasy Dreams float representing Jolly Roger sprayed a sweet candy fragrance. Then there was the Pirates and Princesses Festival (2018-2019), during which Disneyland Park was transformed into an incredible playground where the characters interacted with Guests!

Throughout the resort’s history, Tinkerbell has also participated in many events. In Disney’s Magic Parade (2012), we discovered the mischievous little fairy hidden just behind the float “Celebrate Magic!” and in the Disney Cinema Parade (2002), which told the story of how films were made, she emerged from a reel. She walked Mickey Mouse in the magic garden of Disney’s Fantillusion Parade (2003) and helped Peter Pan restore the magic of the second star in Disney Dreams! (2012).

Tinkerbell is even an icon at Disneyland Hotel, including four dedicated suites that abound with references to the most adorable of fairies. From the paintings from film scenes to the furniture where she’s pictured, everything is done to extend the magic. The ideal end to a day spent dreaming of adventure!