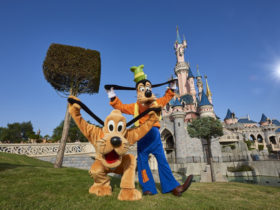 Let’s go back to one of the most famous villains of The Lion King, the very famous Scar. Read his biography and his whole story.

Scar’s real name is Taka, a Swahili word meaning ‘dirt’ or ‘rubbish’. From the book ‘The Lion King: Six New Adventures’ and Askari which means ‘police’ according to The Lion King Guard. In the book, Taka leads a plan to undermine his brother in the eyes of their father and win the throne. Taka manipulates Mufasa and together they confront Boma. A buffalo that refuses to share the water, while the Land of Lions has been drying up for several days.

Mufasa manages to reason with Boma when Taka says that by royal order he must allow access to the water or Mufasa will fight him. The buffalo then emerges from the water and tries to charge Mufasa, who manages to escape with the help of Rafiki. But Boma wants his revenge, so he takes care of Taka who loses consciousness and is saved by his brother. It is finally Ahadi, the father of the two brothers, who puts an end to this battle. However, the young lion will keep a scar on his left eye and will ask to be called ‘Scar’. This is to remind him of how stupidly he let himself be controlled by his brother.

However, in ‘The Lion Guard: Battle for the Pride Lands’, one of the episodes of The Lion King Guard series, Scar sings a song called ‘When I became Scar‘ and explains that Askari (his name in the series) regularly ventures into the Forbidden Land. One day, he meets a strange lion to whom he promises wisdom and strength if he becomes king. The latter accepts Askari’s help and takes him before a cobra, which attacks him and scars him with its fangs. The lion promises Askari to heal him if he obeys him. But Askari gets angry and ends up killing the lion and the cobra. Once back in the Land of the Lions, Mufasa mocks him and calls him Scar. This version is the one officially used as the true origin of the name Scar.

Scar is the head of the king’s guard and has the power of the Roar of the Ancients, a cry that can destroy everything. This power goes to his head and he imagines himself becoming king in Mufasa’s place. But the king’s guard refuses to help him and Scar uses the roar against them, killing them all. The lion didn’t know that if he used the roar to do harm, he would lose that power.

You like Disney Villains, we recommend Lady Tremaine and Edgar the Butler.