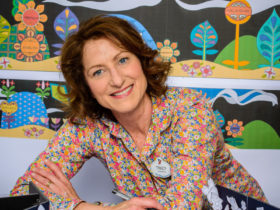 It’s been a few days since the Christmas parade made its comeback at Disneyland Paris. A few members of the team had the chance to attend. Here is our opinion…

Our team is unanimous: it’s great to see a parade at Disneyland Paris again! It brings a dose of magic to the park, especially since this parade is new!

The evening parade is magnificent! The dancers are numerous and their costumes and make-up are nice. The Show Stops differ depending on where you are and the one next to the tree is really excellent. They take the time to build up the mayonnaise with colours for all the main characters so you have time to enjoy.

For those Guests who rarely come, this can be disappointing. For example, some people who don’t like Mickey but prefer princesses (surprisingly, it does exist!), might be disappointed if they find themselves in a Show Stop in front of the Mickey or Minnie float, with the princesses on the opposite side…

On the other hand, for the Guests who come back regularly, it is an incredible happiness! We only want to go back and look for all the possible angles to admire as much as possible.

A minority of our team is not so enthusiastic… According to them, the only Show Stop that is worthwhile is the one with the tree, and that the others are a bit slow. They added that it would also be interesting to have a “castle illumination” Show Stop after the tree Show Stop. (Editor’s note: the show stops are currently suspended).

The music of the Christmas parade

In addition, there are problems with the acoustics. The music system does not work at all in Central Plaza because the main track comes from the tanks.

The floats of the Christmas parade

Our reporters found the floats very well done, beautiful and magical at night. They have beautiful colours and are very fresh.

The parade features a wide and varied range of characters with beautiful costumes. Mickey looks particularly good in his Christmas outfit!

One of our reporters thinks it would be interesting to add characters from Christmas mythology such as snowmen, nutcracker soldiers, Santa’s reindeer. He would also like to see characters that don’t come out very often (in this parade, there are the 3 little pigs, Max, Winnie and his friends, …).

This parade was a particularly eagerly awaited moment for the whole community and was generally well received! We will remember the enchantment of the floats at night, the Show Stop for the illumination of the tree and the costumes of the dancers. The only real negative point of this parade is the musical band.

What do you think of this Christmas parade?