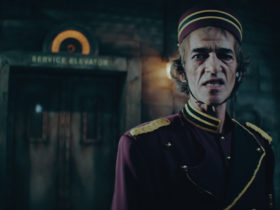 Lyrics – Are you brave enough?

The Cheshire Cat: Its origin before Disney

The name of this iconic cat is a tribute from Lewis Carroll to the county of Cheshire (or Chester) where he was born.

Long before it came to life in the crazy world of Lewis Carroll, we find in 1788 in a classic dictionary written by Francis Grose, an expression that bears his name: “Cheshire cat: smile like a Cheshire cat”. This means that a person smiles while showing teeth and gums!

He is a character who is completely foolish, very philosophical and playful at the same time. But he always understands what is asked of him. He is very complex and mysterious, which is also what makes him fascinating!

In the Disney animated version, he is pink with purple stripes. However, in the live action version, he is blue with shinier stripes. In both versions, he keeps his huge iconic smile.

He likes to disappear, leaving only his big smile visible or his head that he turns over and over. His physical appearance and the way he plays with his power accentuate his eccentricity!

One Cheshire cat but two personalities

In the animated film, we discover a playful and mischievous Cheshire. He even gets Alice into trouble by making himself invisible and making the Queen of Hearts fall backwards!

He is a cat who likes to show off his disappearing skills and philosophical language. However, it is noticeable that he almost always comes to Alice’s aid when she needs it.

In the films Alice in Wonderland and Alice through the looking glass released in 2010 and 2016, we perceive, clearly more friendship and kindness of this zany character. Indeed, he guides Alice, helps the hatter not to be beheaded. He gives the hat back to Tarrant and is present during the final battle to support Alice. It is a cat always mischievous with great phrases, but more endearing than ever.

We can see that this character is so emblematic that he can be found in various universes! It fascinates by its surrealist side, but at the same time sensible!