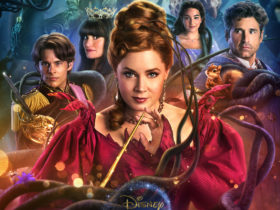 As you can imagine, I was really looking forward to the 5th and 6th of March for the launch of the 30th anniversary of Disneyland Paris! Until now, I had never had the chance to be present in the park on the first day of a themed season launch or an anniversary! So it was with joy and good humour, with family and friends, that I spent two and a half days at the Magic Kingdom!

On the evening of 4 March we arrived at Disney’s Hotel Sequoia Lodge. The atmosphere was, as always, friendly and convivial.
The 30th anniversary of the park was simply mentioned in a promotional video on the TV screens in the hotel lobby.
After a restful night in comfortable bedding, we had a hearty breakfast at Hunter’s Grill. Then off to the Magic Kingdom!

Our magical weekend begins… and without a mask, after a very complicated period due to the covid 19 health crisis. We start our adventure at the Walt Disney Studios where Mickey greets us from the balcony of Studio 1.
The 30 years decoration is only present on the lamp posts located on the Place des Frères Lumière, as well as on a giant poster at the entrance of Studio 1.
We were able to enjoy the extra magic hours and it was very nice. Around 10:30 we headed to Disneyland Park!

The Main Street USA station is beautifully decorated with a spinning 30 th logo!

I really liked the colours! The blue and fuchsia, in my opinion, accentuate the enchantment of Mickey’s Kingdom every time, but they are also reminiscent of the 25th Anniversary. I liked the decoration of each lamp post lining Main Street. Even if the style of ornamentation is not unanimous, everything is top-notch thanks to the refinement and harmonisation of the theme.

The fairy gardens are a good idea. They refer to many characters from the Disney universe. I don’t like this kind of design very much, but I agree that the idea is original and unexpected. I regretted not seeing the park a little more decorated in its entirety. On the other hand, the illuminations at the end of the day, by leds, placed everywhere in Fantasyland and Main Street, are a treat for the eyes! And I especially noticed the fuchsia coloured ones, located in some trees. I guess you understand that I have a particular weakness for the colour fuchsia !

The atmosphere in the park is festive and so is the mood of the Cast Members!

Under blue skies and bright sunshine, we were finally able to discover this long-awaited show entitled “A world that lights up!” We had no idea what to expect with this novelty even though we had already heard its breathtaking melody!

It is thus in a joyful atmosphere and a general fervour that we attended it! It is really amazing and full of pep! The Disney medley on which the dancers, the characters and the floats move, also brings a note of nostalgia since, if we listen carefully, it includes several musics of former parades of Disneyland Paris!

Central Plaza almost becomes a choir and a bit of a dance floor! The fact that this time the choreography allows the actors to dance and change podiums frequently is ingenious and delights everyone! Mickey and Minnie, Donald and Daisy and their friends are dressed in gala costumes. And many other new characters are pleased to wander around! Their presence is a total surprise !!!! Like Miguel, the 13-year-old budding musician, hero of the film Coco, and many others!

Like many other guests, we were also looking forward to D-Light !!!!

After spending an afternoon with stars in our eyes, we took our places at the foot of the castle, at around 8pm, to watch this jewel of the park’s 30th anniversary!
It was an innovative idea on the part of Disneyland Paris to have thought of offering us this ballet of drones through the company Dronisos, a specialist in this field.

Disney D-Light presents us with a technology never before seen at Disneyland Paris. We have the impression of being transported into a new era. At the beginning of the show, the emotion is palpable among the audience, especially when the drones make the logo of this 30ᵉ anniversary appear!

But barely enough time to photograph it, it disappears (sniff )… We think that this long awaited event is already over! Amazement and frustration are on everyone’s lips when a few minutes later, Disney Illuminations makes its appearance and return! It’s still as beautiful and magical as ever, but unfortunately “déjà vu” and somewhat “out of place” compared to the technological prowess offered by D-Light.

At the end of Disney Illuminations, some spectators are about to leave the park, D-Light is back! So don’t leave after Illuminations!
D-Light is back with the invigorating anthem of “A World That Lights Up” with water jets and light shows. And the drones present the 30 year logo again in a different form to the first, then Mickey’s head appears spinning in a circle, accompanied by light effects, water jets and mist.
The satisfaction of the spectators is heard and the melody of “A world that lights up” resounds, is taken up by the audience… and the magic happens!

It is a pity that the performance of the drones is not more diversified. We would have appreciated a show with a greater number of performances evoking the Disney universe, and that these were more in motion in a perhaps faster and more fluid sequence.

After another night in our cosy and comfortable nest, and almost feeling like we are really in the heart of the American national parks, we realise that March 6th has arrived, and that it’s D-Day! The launch of the 30 years of Disneyland Paris is official!

When we sit down to breakfast at Disney’s Hotel Sequoia Lodge, the 30th anniversary of the park is displayed on the placemats.

The choice in this buffet formula is varied and excellent. In addition, the waffles, among other things, are in the image of our favourite mouse! ✨

A new day in Disneyland Park

Mickey and Minnie were waiting for us on the balcony of Main Street Station!
This second day is much quieter than the previous one. We spend it doing some attractions but mostly enjoying the park and seeing the show again!

I thought that on the occasion of this 30th anniversary weekend, a ceremony with at least the Ambassadors of Disneyland Paris, and with the President of the Park and her collaborators would take place, but there was no mention of it, neither on Saturday nor on Sunday… I was disappointed. There is certainly a reason for this decision, but we felt that this kind of event was very much lacking! Let’s hope it won’t be the same for the next April 12, the park’s anniversary, as well as for the next opening of Avengers Campus!

Quentin Rodriguez, ambassador of Disneyland Paris, only made a few appearances in front of the castle… and Carmen Lleo Badal, ambassador of Disneyland Paris, was, it seems, a little further in the park.
Afterwards, we had the pleasure of going for a snack, with friends, at Victoria’s Home Style and tasted these very appetizing little treats. The organisation of the service was laborious….

Then, as all good things must come to an end, we had to think about leaving the land of enchantment to return home.

Despite some disappointments for the launch of this new season, this weekend was, nevertheless, full of magic! ✨

For another opinion, concerning this event, do not hesitate to consult the following article: Disneyland Paris 30: a anni-not-so-versary