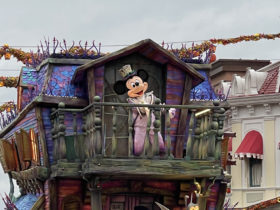 Should Disneyland Paris have had a plan B to compensate for the prolonged absence of parades and shows? –

Since 1997, Pixar Studios has been offering viewers a short interlude in the form of a short film during the opening of their films. From 2004 onwards, this has become a regular feature. We can’t get enough of these imaginative stories. Combining state-of-the-art technology and a quality script, these little animated gems move us as much as they make us laugh. Since 2017, the new cartoon making programme called SparkShorts gives each member of the studio (technician, animator or director) the opportunity to make their own short film. The films are now aimed at an adult audience and embrace contemporary themes such as sexism and homosexuality. What’s more, with the arrival of Disney +, it is now possible to watch them all. Let’s take a look at the best Pixar shorts!

This film, directed by Ralph Eggleston, was screened as the first part of Monsters Inc. in 2000. It is not uncommon to see birds gathering on the wires of telephone lines. What is a little less common is to see them fighting for space. Each one makes a beakful until a large bird with colourful plumage arrives and provokes the mockery of the other birds. He who laughs last, laughs hardest…

Directed by Jan Pinkava in 1997, this film places the plot around Geri. This character, who is none other than the toy restorer in Toy Story 2, starts a game of chess against his more lively and combative alter ego. The latter, with sarcastic sneers, is close to winning the game. But the former, wiser and more cunning, fakes a heart attack to turn the board upside down. His opponent gives the old man his dentures back and he starts to laugh in turn.

This 1989 short film, directed by John Lasseter, features a snowman trapped in a snow globe on a shelf. Among the other souvenir gadgets around him, he spots a young woman in a bikini beckoning him to come closer. Using increasingly destructive means, he tries to escape from his glass bubble. Eventually the snow globe falls off the shelf. In the fall, the snowman manages to get out and lands in an aquarium where he meets a mermaid. However, as fate would have it, the snow globe falls back onto the unfortunate character.

In 2016, as the first part of Finding Dory, this short film directed by Alan Barillaro shows a woodcock and her baby on the beach. The mother teaches the baby to become autonomous and find its own food. The little bird, frightened by the waves, finally gathers all its courage by watching a young crab burrow into the sand to escape the swirls.

Airing as the first part of The Incredibles 2 in 2018, the short film is directed by Domee Shi. It is about a Chinese-Canadian woman who, after her son leaves for university, finds a new opportunity to become a mother again when her steamed ravioli comes to life.

🏆 Nominated for the Oscar for Best Animated Short Film in 2020.

Kitbull was directed and written by Rosana Sullivan. It is the third film in the SparkShorts programme. The plot focuses on a kitten roaming the streets who meets a pit bull, who is abused and used for dog fighting. The two animals form a strong friendship and support each other through all the difficulties of life on the streets. They are finally adopted by a nice family. The film ends with the kitten and the dog playing happily on top of a hill overlooking the city.

🏆 Nominated for the Oscar for Best Animated Short Film in 2021.

Directed in 2020 by Madeline Sharafian, it is the 8th SparkShorts film. The film is about a rabbit who wants to build herself a rabbit hole. For fear of being laughed at, she refuses to ask for help or advice from those around her. With Mozart‘s concerto as a backdrop, the little character digs so deep that he ends up causing a series of catastrophes. The little rabbit then fights her shyness to ask for help and, with the help of the other animals, ends up with an even more beautiful home than she had originally imagined.

Directed by Steven Hunter in 2020, it is the 7th short film in the SparkShort programme. The plot features Greg, a young gay man who has not yet come out to his parents. On the verge of moving in with Manuel, his boyfriend, Greg finds himself trapped in the body of his dog. This event will give him the opportunity to realize that his parents love him as he is and that he has no reason to hide the truth from them.

The film was directed by Kristen Lester in 2018 and it registers as the first short film in the SparkShorts programme. It tells the story of the early days in a company of a pink ball of wool, Purl. Ignored by her male colleagues, she then tends to act like them to fit in. This works. However, the arrival of another ball of yarn, Lacy, prompts her to turn back. They become friends and Purl invites her to share a drink with the group of colleagues. After some time, the company is revealed to be a more diverse combination of men and balls of wool, working as a team.

The 9th short film in the SparkShorts programme, the film is directed by Aphton Corbin.

On her 21st birthday, Gia goes to a club to celebrate her coming of age with her older sister. However, she finds it difficult to behave like an adult and feels out of place. Taking refuge in the toilet, she begins an inner dialogue in which the baby, the little girl and the teenager who make up her are confronted. The three of them, hidden under a large coat, successively take control of the situation and follow one disaster after another. Finally, Gia, with the comfort of her sister, manages to regain control of her emotions and regains her self-confidence.