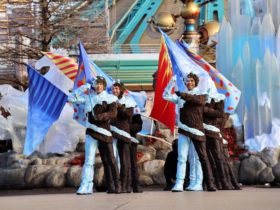 Is entertainment at Disneyland Paris on the decline?

Contrary to what you might think, the longest queues at Disneyland Paris are not for Crush’s Coaster or Big Thunder Mountain but for Annual Pass (purchase or renewal). Yes, yes, you read that right and without Disney Premier Access, of course, it’s more fun!

I renewed my Annual Pass on Sunday 10 April when I arrived at the park, as it was due to expire on 19 April and as I don’t live near the park, that was the only time I could renew it.

Part of the afternoon was spent waiting.

Arriving at the Annual Pass desk at Walt Disney Studios Park, a Cast Member welcomes the guests by asking them if they have all the papers and indicating an approximate waiting time.
The Cast Member asks me if I have to renew it today, I tell her that knowing that it will expire in a few days I have no choice. She discreetly tells me that the waiting time is very long, more precisely 3h30 of waiting (at this moment it is 2pm).
Note that the offices are open from 12pm to 5pm, until 5pm you can queue. If you want to benefit from the 15% discount there is no other choice than to wait, the code that we received by mail at the time of the 16 months for the price of 12 is over.

In the queue, about fifty people (families, children in pushchairs), we waited under the sun (fortunately it wasn’t raining) and without a water point or toilet nearby.
Advice: bring something to do and a bottle of water to make the time go by faster.
The waiting time is not indicated to everyone, the person behind me thought she was waiting 45 minutes because of the crowd.
If you want to renew or deduct the price of a ticket for the creation of a pass, you have no choice but to be patient. Otherwise I strongly advise you to create it on the Internet because the only thing you will have to wait for is the postman to come.
The number of open offices varies between 2 and 5, there is also a PRM queue.
People complain (a lot) about the Cast Members and the organisation or disorganisation of Disneyland Paris.
Some people ask why there are not more ticket offices open, i.e. the privilege ticket offices are open but there is no one there.
For families, the time at the ticket offices is much longer (which is logical) so we move very slowly in the queue. Contrary to some attraction queues, this one is not really aesthetic and fun, so you get bored quickly.
My laptop and my external battery were my most faithful allies and the 4 episodes of a series I could watch.
3h later it’s soon mine and the patience starts to escape slowly.

All this for 10 minutes:

At 5.15pm it’s finally my turn and my nerves give out, I burst out laughing in front of the Cast Member and tell her that after waiting so long I can’t take it anymore. She understands me and apologizes for the waiting time. I tell her I’m here to renew my annual pass, I feel so sorry for the people waiting behind me that I do everything quickly.

She asks me if I want to redo the photo or reuse the current one, I tell her we’ll redo everything identically so as not to waste time. And there the blabla and the signatures begin, the general conditions, the reservation system, the verification of all the details. A few signatures later, it’s all over.

Knowing that you can’t renew online to benefit from the 15% discount or deduct the price of an entry ticket for the creation of an Annual Pass, there is no other choice but to go (when possible). At the time of the 4 months offered this was possible but this is the old days of Disneyland Paris.

The wait is very long and I advise you to start waiting well before the opening of the ticket offices or to create a new pass online which will not make you lose time (except if they lose your papers).

The only thing missing is Disney Premier Access to make it a real attraction.
Despite this the Cast Members do everything they can and even if people grumble, everyone remains respectful of each other (on the whole as there are always exceptions).
I went knowingly I expected to wait but not so much because it’s still quite disorganized and the number of open counters remains quite low compared to the flow.

The question that remains :

When will the annual pass offices in Disneyland Park reopen?