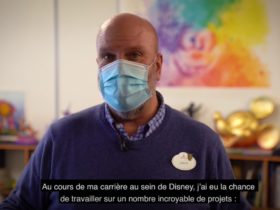 Music has the power to make us travel in time and space with a few notes. And what better than Christmas music from Disneyland Paris to warm hearts and immerse us in the magic of the Holidays. In this very special period, let us be transported according to our most beautiful musical memories to these enchanted places that we miss so much ..

There are tunes that accompany us all our life and evoke in us magical moments forever engraved in our memories. “Petit Papa Noël” or “Vive le Vent” are among them. And what better time to rekindle these childhood memories than the traditional Christmas tree lighting, which has seen many versions over time?

In one of them, Mickey and the Magic of Christmas Lights (2015), we could hear these songs interpreted in a particularly warm way, repeated in chorus by Mickey, Minnie, the Christmas Carolers and all of the guests gathered around of the Christmas tree.

“Vive le Vent” already resonated during the very first Christmas Parade (1992-1997) where it was associated with “Douce Nuit”, as well as in the “it’s a small world” Celebration (2009), a reimagined version of the iconic attraction celebrating the holiday spirit around the world.

But tradition does not exclude a touch of modernity. These same songs and a few others were found in La Parade Electrique de Noël (1992), slipped into the famous “electro-synth-magnetic” music. The former Music Director Vasile Sirli had also selected these themes of Noël based on the memories of the Cast Members, to whom he had asked what their favorite tunes were.

In the countries of Anglo-Saxon tradition, there are also “Christmas Carols”. Their origins date back to the 15th century, but it was in the 19th century that this repertoire was enriched with its most famous titles such as “Joy to the World” (1839) and “Hark! The Herald Angels Sing” (1840/1855) performed by small a cappella choirs or brass groups in the streets of towns and villages. Continuing this Victorian tradition, Main Street, U.S.A. has long hosted Christmas Carolers, most notably during the entire early version of the Christmas Tree Lighting Ceremony. As for the brass, we find them in the ambient music of the Land, played by some of the most famous ensembles like the Empire Brass or the Philadelphia Brass.

The Christmas repertoire also includes many classical works, starting with the music of Pyotr Ilich Tchaikovsky’s ballet-fairy The Nutcracker, which remains a staple of the season. At Disneyland Paris, it was used on several occasions, notably for La Parade de Noël – Mickey’s Nutcracker Parade (1997-2003) and for the decoration of the tree in Goofy’s Incredible Christmas (2017) at Walt Disney Studios Park. In the show Mickey’s Christmas (1992-2006), we could discover a parody version of the “Dance of the Sugar Plum Fairy”, interpreted with a grace… quite relative to the Country Bears!

And at Disney Village, World of Disney Christmas ambient music revisits the classics in a symphonic version, even with an excerpt from Giacomo Puccini’s opera La Bohème, whose action takes place precisely during the holidays in Paris!

On the other side of the Atlantic, Christmas has a swing, and this other tradition is also present at Disneyland Paris and especially at Walt Disney Studios Park. At Studio 1, the background music is clearly jazzy, with “I’ll Be Home for Christmas”, the standard immortalized by Bing Crosby. And at Animagique Theater, ‘Mickey’s Christmas Big Band’ (2017) featured 1930s jazz standards, in the spirit of Duke Ellington and Glenn Miller, with arrangements typical of classics like White Christmas.

Musicals are also in the spotlight with, among others, Babe in Toyland’s “March of Toys” (1961), Walt Disney’s adaptation of a musical by Victor Herbert (1935). It could be heard in 1992 in the first Christmas Parade, performed by the Toy Soldiers themselves on Theban trumpets – those long, straight trumpets that are used in certain ceremonies. Another flagship title, “We need a little Christmas”, from the musical Mame, created in 1966 by Angela Lansbury, and which we could hear in the show Mickey’s Christmas (1992), as well as that at the opening of La Cavalcade de Noël (2012-2014).

But Disneyland Paris doesn’t just revisit the standards. Over the past few years, our destination has produced several original titles that are now part of the season’s repertoire. A true synthesis between European Carols and North American jazz, “Ring the Bell”, sung by the Carolers of Town Square, accompanied the illumination of the Main Street, U.S.A lampposts during The Tales and Lights Ceremony (2004).

But perhaps the most iconic original title remains “Chante, c’est Noël!” composed by Vasile Sirli in 2003. While traveling in Norway, inspired by the Nordic atmosphere, he imagined a Christmas tune. Unfortunately, he hadn’t been able to memorize it long enough to write it down. He then gets back to work to create a melody that fits perfectly into the holiday spirit and stays in mind, like “it’s a small world”. From the latter, he notably takes up the idea of ​​a children’s choir, in this case that of the chapel at Windsor Castle. And for the orchestration, he brings in an American composer, who was a production assistant on “Dancin ‘(a catchy rhythm)”, a certain… Scott Erickson. Since then, the young musician has come a long way and has become one of the main songwriters of Disney Parks and especially Disneyland Paris, for which he wrote “Christmas is here”, an anthem full of energy and hope for the 2017 version of The Disney’s Christmas Parade, on the importance of sharing the holiday spirit in peace and brotherhood. Quite a symbol!