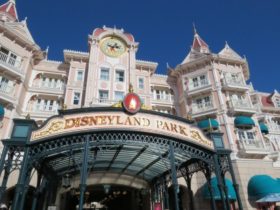 Disneyland Paris : my visit as P.M.R.

Walt’s – an American Restaurant is a gourmet table service restaurant. Located on Main Street – USA, it pays homage to Walt Disney both in its decoration with its many references and in its menu, which is supposed to be a mix between French and American gastronomy. Closed since October 9, 2020, due to the global health situation, the restaurant officially reopened on April 12, 2022: the 30th anniversary of Disneyland Paris. Several members of our team went there to test the new menu! Back to our lunch in Walt’s!

An elegant and enchanting place

The restaurant’s decoration, plush and refined, remains a feast for the eyes, in other words a real visual aperitif. Victorian in inspiration, we are welcomed in a ground floor typical of an American bourgeois house from the 19th century and early 20th. The piano and the birdcage, elements dear to Walt Disney, as well as his numerous photographic portraits, adorn the place.

As before, the restaurant consists of different themed lounges, reflecting the five lands of the park and the different Walt Disney’s creative episodes.

For our part, we had lunch in the Fantasyland room. As enchanting as ever with its many paintings and sketches of European tales, it was a real pleasure to be back.

For the 30th anniversary of Disneyland Paris, the menu has been completely redesigned and is intended to be a bistronomic cuisine, with “revisited” American dishes. So don’t be surprised by the bizarre encounter between a hamburger and a chilli con carne… Unlike the old menu, the new one is limited to a single menu, Walt’s, at 42 euros (without wine) for a starter, a main course and dessert. The price is certainly affordable but the choice of dishes and wines is less. A single menu and the disappearance of “à la carte” dishes greatly impoverish the offer and restrict the customer.

Moreover, on the occasion of the park’s 30th anniversary, we were entitled to expect dishes that were worthy of such an event. The new menu has moved away from its previous gastronomic essence. We can see that there is very little variety of meat (chicken, which we find both as a starter and a main course, and beef) and only one fish. On the other hand, we can underline that it is appreciable to find a Vegan dish among the suggestions of dishes.

On this menu, we tasted, among others:

The meat starters and main courses are good, but quite simple and basic. For example, the chicken fillet is fine, but the preparation of the meat is nothing exceptional. The same goes for the chilli con carne, which is not very unusual. The presentation of the dishes, less elaborate than before the restaurant closed, is a little disappointing. We can note an attempt to destructure the chili by putting the filling on the side, in a cup shaped like a can… But it is a little light and the idea lacks refinement.

The 30th anniversary celebration cake is a miniature, immaculate tiered cake. Served under a glass cloche, it is studded with little stars and set with a 30-year medallion. The visuals are delightful, the entremets, with a raspberry insert, are indulgent and the flavours refreshing. However, the dessert falls short of the expectations one might have had of a celebratory menu in a table service restaurant. It is still an industrial dessert, bombed out.

The lemon meringue pie is the pleasant surprise of this menu! Very tasty, the meringue is well done and the acidity measured. A delight for fans of this dessert!

This is not to criticise the work of the Casts who, as usual, are very considerate and unparalleled in their correctness. However, the extreme slowness of the service and numerous oversights are a significant shadow over the lunch. An obvious lack of organisation and/or a lack of staff are surely the reason for this. But it is a shame to spoil the experience of the restaurant’s reopening for this, especially on the park’s 30th anniversary.

To conclude, lunch at Walt’s is a beautiful experience. But this is mainly due to the singular beauty of the place and its meaningful decoration. The food is good and appropriate for the price. However, the basic and simple preparation and presentation of the dishes keep the restaurant from reaching gastronomic heights.