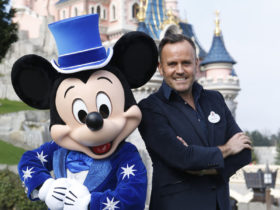 As of 6 March 2022, Disneyland Paris has launched the 30tthe Anniversary season. Certain members of ED92 have had the opportunity to take part in the destivities and discover, at the first look, the new additions in the park. And of course, it’s not a birthday party without a feast. Our team members have kindly devoted themselves to testing the food offer (at least, those which were available). Discover our review of the 30th Anniversary snacks!

An overview of savoury snacks: “The quickest way to a man’s heart, is through his stomach…”

Let’s start with the main course! One of the park’s flagship additions, the star of the snack menu, is the roast turkey drumstick, the famous Turkey Leg from Disneyland California, notably served in the Last Chance Café.

Even if the meat is notably full of flavour, it is still on the dry side. Well, the ratio of quality/price takes quite a hit!

Ices, Ices, Ices: “Why didn’t they call me “the Adorable Snowman”? “

Among the new food items, we can’t possibly pass by the 30th Anniversary ice creams which have appeared on the menu of Victoria’s Home Style Restaurant. Each one is in the design of a character, in a particular flavour. The team was not afraid to try them, braving the winter temperatures with courage!

One good thing about the cold, the photo shoot took place in quiet surroundings…

The one that was unanimously approved! Its 3 scoops of strawberry cheesecake flavour are light, while its white chocolate Lotso and its soft pink hues whet the appetite.

Nota Bene : Unfortunately, the topping wasn’t available on the launch day, 6 March. Thank you to Angèle, the Cast Member who completed it with pink and purple smarties.

In second place on the podium, we find out favourite duck. Fun fact, this marks the first time you will taste one in ice cream form.

Joking aside, under the vanilla ice cream, the wafer pieces and the delicious caramel sauce are a very tasty addition.

This ice cream will delight all fans of chocolate and cookies. What’s more, the house surrounded by multicoloured sweets, floating above icy clouds is a nice nod to the film and the rendering works well. All the same, the cookie dough fills up your stomach rather quickly, so that it is difficult to finish the pot…

In last position, the Stitch ice cream is far from being a winner. It’s not bad, but it’s not particularly good either. The vanilla flavour is beyond basic and offers nothing more. To do the character justice, a chilli or black garlic ice cream (yes, it exists!) would probably have been more convincing, or at least would have provoked a strong reaction.

It was a pleasure to taste them this summer because, to tell you the truth, some of the team ended up as ice statues after this tasting.

In the left-hand hub, the stand offers giant shortbreads in the shape of Mickey and Minnie. Don’t be fooled, the biscuit breaks very easily and goes perfectly with a hot drink for a snack.

At the same outlet, it’s also possible to pick up Mickey and Minnie cake pops. They are very pretty and appetising. All the same, take care! The biscuit is so hard you risk breaking 2/3 teeth. Feel free to break it by hand, or use a sledgehammer, the choice is yours.

Note : a little difficult to finish as the icing is a little bit sickly in the long run.

The pastries: “A great dessert, an éclair!“

At Victoria’s Home Style Restaurant, it’s now possible to order the festival of “Minnie’s sweets” : a selection of 3 or 5 pastries, priced at 6 or 9 euros. The flavours, in the signature style of the park’s 30th Anniversary, feature purple with blueberry, blackcurrant or raspberry.

Among the desserts, we have:

At Café Hyperion, menu 5 offers a special 30-year cake for dessert. Composed of a sponge cake and a chocolate mousse, the dessert is good and light. However, the price of 5 euros may seem a little excessive for a mass-produced pastry.

To finish the meal, here’s what we could learn from the various snacks offered on the occasion of the park’s 30th Anniversary.