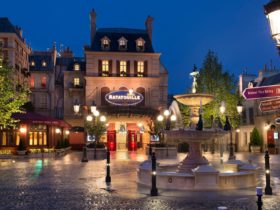 Birth of a star

Angela Lansbury was born in London on October 16, 1925, near Regent’s Park, to an actress mother and a lumber merchant and politician father. The latter died of cancer when Angela was only 9 years old.

In 1942, the household, consisting of Angela, her two brothers, Edgar and Bruce, and her mother, left England for the United States, under threat of German bombing. Only Isolde, Angela’s half-sister, remained in the United Kingdom with her husband, the actor Peter Ustinov.

The family moved to New York where Angela attended the Feagin School of Drama and Radio. Her mother travels extensively to find a job. She finally contacted her from Los Angeles to inform her that she had found a job for both of them in a large Bullocks-Wilshire store. Angela is a saleswoman in the cosmetics department, while her mother is in the toy department.

In 1944, her mother hears through her circles of acquaintances that the MGM film company is looking for a young English girl to play the role of a maid in the film Haunting. Angela passed her audition with flying colors and signed a seven-year contract with the company.
Her performance earned her her first Oscar nomination for Best Supporting Actress.

Then it is her role of the fragile Sybil Vane, in The Picture of Dorian Gray that allows her to win a second Oscar nomination.

Her two nominations gave her a status of quality actress, so Angela multiplies her filming opportunities in big Hollywood productions, such as Les Demoiselles Harvey, The Singing Rain or The Three Musketeers in which she plays alongside Gene Kelly.

In 1948 she met her future husband, Peter Shaw, at a party organized by his friend Hurd Hattfield. Between them, it was love at first sight and the couple got married on August 12, 1949.

Between 1950 and 1955, Angela devoted herself more to television. She was received as an artist in programs such as Playhouse or Lux Video Theatre.

In 1952, she welcomed her first child, her son Anthony, then her daughter Deirdre Angela, a year later. She then chose to space out the shoots in order to be available for her family.

The call of the boards

It is the turn of Broadway to make eyes soft to the actress. Indeed, in 1957, producers offered her to play in the English adaptation of The Free Trade Hotel by Georges Feydeay and Maurice Desvallières. The experience is a good one, so Angela accepts the role of Helen in the comedy A Taste of Honey in 1960.

At the same time, she continued to act for the cinema and landed a series of comic roles. In 1962, her performance in the crime film A Crime in the Head earned her her third Oscar nomination.

In 1970, after a fire at their house in Malibu, Angela and her husband decided to return to Europe. They settled permanently in Ireland.

Less present on the big screen, Angela Lansbury is no less memorable in Bedknobs and Broomsticks by Disney Studios in 1971. She plays the role of Eglantine Price, an unconventional witch who tries to save her country from the German invasion during World War II. The film was a great success in the United States and the United Kingdom.

The year 1984 marked a real turning point in the career of Angela Lansbury. Indeed, following his memorable performances in detective films, the American channel CBS offered him the main role for its new series Murder, she wrote. From 1984 to 1996, the actress played the famous detective Jessica Fletcher to perfection, a character who still continues to pursue her today.

The reunion with the Walt Disney Company

In 1991, she lends her voice to Mrs. Potts, the enchanted teapot in the animated film Beauty and the Beast. The cartoon is a worldwide success and the song Tale as Old as Time, which she sings, receives the Oscar for best original song in 1992. It is moreover her who will sing it at the opening ceremony of the EuroDisney park (today Disneyland Paris).

In 2000, she made an appearance in the movie Fantasia 2000 to present the last sequence of The Firebird.

In 2001, she participated in the documentary dedicated to the cartoon Snow White and the Seven Dwarfs.

In 2018, she was also seen in Rob Marshall‘s Mary Poppins Returns, in which she had a small role.