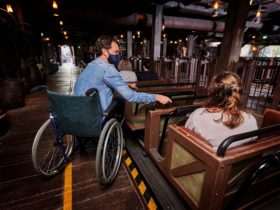 Based on Walt Disney’s childhood memories, Main Street, U.S.A. is full of historical references to American life at the turn of the century. But did you know that many of the details are also inspired by movies?

One of the main inspirations for Main Street, U.S.A., in the Disneyland Paris version, was the musical film Hello Dolly! (1969), directed by Gene Kelly. Eddie Sotto, the Imagineer in charge of the design, had visited as a child the sets of this film, supposedly set in 1890 and was deeply impressed by its elegance and authenticity. It was therefore logical for him, when creating this new Main Street, to return to those first impressions.

Hello Dolly! takes place in New York City and the small town of Yonkers, and on Main Street, U.S.A., there are a number of elements inspired by these different settings, such as the large billboards, the trolley of Horse-Drawn Streetcars, the stairs of Main Street Station and the entrance to Plaza Gardens Restaurant.

The musical is also present in the background music of Main Street, U.S.A., through the song “Put On Your Sunday Clothes”, which can also be heard in Wall-E (2008). This is the little robot’s favourite tune, which underlines the gap between his ideal and joyful vision of the world of the past and the apocalyptic environment in which he lives.

Another essential film in the conception of Main Street, U.S.A. was The Music Man (1962), the story of a fake music teacher who eventually falls in love with the small town people he hoped to fool, and even finds love, in the person of Marian, the librarian. The Storybook Store is directly inspired by Marian’s library from the film, with its columns and characteristic furniture. But that’s not all: the town’s ice cream parlour also inspired parts of the setting for The Gibson Girl Ice Cream Parlour.

It must be said that Meredith Willson, the componist of this musical, is no stranger to the Disney world. At the opening ceremony of the first major expansion of the Disneyland Resort, on 14 June 1959, he was one of Walt’s guests of honour and performed the hit song from The Music Man, “76 Trombones”, in front of more than 2,000 people, played in the Central Plaza by… 76 Trombones, to be exact! Another song from the musical, “Wells Fargo Wagon”, is now on the country programme.

Other inspirations for Main Street, U.S.A. were films produced by Walt Disney himself.

The most obvious one is Casey’s Corner. It is the segment ‘Casey‘ from The Music Box (1946), which sarcastically describes the last inning of a baseball game. This explains the strong theme of this restaurant, known for its hotdog specialities and its decoration rich in souvenirs of this sport. A way of diving deeper into American culture, as suggested by the quote from historian Jacques Barzun posted inside the restaurant: “Whoever wants to know the heart and mind of America had better learn baseball. “

The decoration of the Disney & Co. shop reminds us of the atmosphere of fairs and carnivals of old times, as in the films Danny, the Little Black Sheep (1949), the story of a little boy who takes a fancy to a sheep that everyone rejects, or Pollyanna (1960), whose heroine brings a touch of optimism to the residents of a small town ruled with an iron fist by her aunt Polly Harrington.

The name of Harrington’s Fine China & Porcelains, the fine shop on Main Street, comes from the same man. And between 1992 and 2000, number 76 Town Square was home to Dr Chilton’s Pharmacy, named after Aunt Polly’s admirer. The shop later became part of Town Square Photography before it became New Century Notions – Flora’s Unique Boutique in 2014.

The elegance of Pollyanna also inspired the Victorian décor of Victoria’s home-style restaurant. It is combined with a warm, homely atmosphere inspired by Summer Magic (1963), a charming musical about the arrival of a struggling family in a country American town. This is also recreated at Market Street. You can use Digby’s Messenger Service (Digby Popham is one of the characters in the film) or the Beulah Boarding House, named after the town where the story is set. The Sherman brothers will compose several songs for this production, including “Beautiful Beulah” and “Flitterin'”, which is part of the Land soundtrack.

The film The Happiest Millionaire (1967) is set in 1916 America and is definitely a must-see. The movie tells the story of a wealthy Philadelphia excentric who struggles with the fact that his daughter is leaving the family home to get married. Rumpleheimer’s Ice Cream Parlor, where the lovers Cordy and Angie meet, was another inspiration for The Gibson Girl Ice Cream Parlour. The Mercer 35 driven by the latter, a car enthusiast, has its equivalent on Main Street (also similar to George Hautecourt’s in The Aristochats (1970)). As for the main theme of the film, “Fortuosity”, it is heard daily on the street.

In general, the colours of Main Street, U.S.A. are unique in the world. They were developed in collaboration with the legendary Imagineer John Hench and are inspired, among other things, by the warm and gentle colour palette of Beauty and the Tramp (1955), which is also set at the turn of the century in a similar Victorian setting.

All these details, and many more, maintain a nostalgic and warm atmosphere and make Main Street, U.S.A. a land of joyful living.