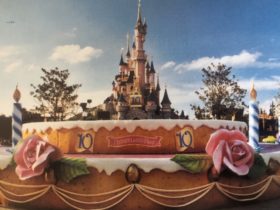 The story begins on 24 March 1987 when Jacques Chirac, French Prime Minister, and Michael Eisner, Chairman of the Board of Directors of The Walt Disney Company, ratified the construction of the Euro Disneyland resort and the development of sector IV of Marne-la-Vallée after several months of negotiations. A few kilometers to the east of Paris, the land that was to become “Euro Disneyland” consisted of nothing more than fields bordered by five villages. However, in this first aerial view of the time, it is here that Disneyland Park is about to be built. This journey through time traces the construction and evolution of Disneyland Paris from the sky.

The first berms emerge from the earth. They will isolate the park from the outside world and limit the visual and sound impacts for residents of the tourist complex while creating a veritable wall of vegetation around it. The contours of Disneyland Park are already well drawn and the various earthworks suggest the location of Main Street U.S.A., the Disneyland Hotel or even the Rivers of the Far West bordering Big Thunder Mountain.

To the north, the visitor car park is just a stretch of land, while the Disney Village or rather “Disney Festival” is only recognisable by the digging of its lake. To the west, the first backstage buildings were built. The other hotels exist only in the imagination of their designers and on a few jealously guarded plans. From north to south, the route of what would later become the TGV and RER line can be seen.

The construction process is accelerating. Numerous cranes have gone into action and are busy bringing most of the buildings out of the ground. Attractions, shops, restaurants and hotels, to name but a few, are gradually rising into the Marne-la-Vallée sky.

At this stage, the absence of significant work on the Autopia attraction is to be noted on the Discoveryland side. Indeed, the latter was not initially planned to be present at the opening of Disneyland Park two years later. It was the Discovery Mountain project (which later became Space Mountain) that appeared on the original model exhibited at the Preview Center. History would later show that this was not to be.

As you can see on the following view, the construction site of the Disneyland Hotel is growing. It will soon mark the majestic entrance to Disneyland Park, where millions of visitors will pass through.

All other Disney hotels, with the exception of Disney’s Davy Crockett Ranch, are also under construction.

At the train station, work has begun on the infrastructure. Festival Disney is still very discreet.

The structure of the visitor car park is beginning to take shape. There is no toll for access to it yet.

The beginnings of the Disney Festival are also emerging. As for the hotels, their construction continues at a frantic pace. All the traffic routes that will allow access to the resort are now under construction.

As far as Disneyland Park is concerned, a real progress can be noted compared to the beginning of the year. From the air, it looks like a giant anthill. The rights-of-way of many iconic buildings are particularly recognisable. Some of them are already at an advanced stage of the structural phase. The location of the attractions Star Tours, The Visionarium, It’s a small world, Pirates of the Caribbean or the restaurant Café Hypérion and its showroom Vidéopolis can be guessed.

After 1991, the construction of Disneyland Paris seen from the sky still has its share of evolutions. Read more about this journey through time here.