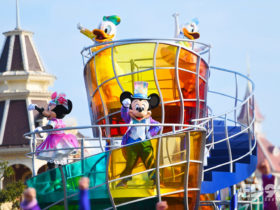 Lyrics – Ready For the Ride – 30th anniversary of Disneyland Paris

The year 1991 marked a new major stage in the construction of Euro Disneyland from the sky. There was a densification of built-up areas everywhere.

Festival Disney, designed by architect Frank Gehry, is showing its almost final form. This artery, composed mainly of shops and restaurants, leads straight to the lake. Speaking of the lake, one of the arms originally ran to the roundabout where the Vapiano and Five Guys restaurants are now located.

Structural work on Disney’s Hotel New York, Disney’s Sequoia Lodge and Disney’s Newport Bay Club has entered its final phase with the installation of the roofing elements protecting the buildings from the Marne-la-Vallée weather. The same is true for Disney’s Hotel Cheyenne and Disney’s Hotel Santa Fe further north. The emblematic Disneyland Hotel has a new look with its red roofs.

While the construction of the visitors’ car park continues, most of the roof slabs over the tracks are laid. The first passenger buildings are being erected.

At Disneyland Park most of the buildings, including those housing the attractions, are now at an advanced stage of completion. The various theming elements are gradually taking over. In front of Star Tours the octagonal ‘Star Traders’ shop is visible in front of the attraction. However, the suspended X-Wing, marking the entrance to the attraction, has not yet landed on our galaxy.

In the background of Fantasyland, Alice’s Curious Labyrinth is beginning to stand out. Just below, three circles represent the attractions Dumbo the Flying Elephant, Mad Hatter’s Tea Cups and Lancelot’s Carousel respectively. In front of It’s a small world, the queue cover is placed. On the Adventureland side, the rocks of Adventure Isle and Robinson’s Cabin reach for the sky.

The construction site of Sleeping Beauty Castle is not very visible from the air but it also attracts a lot of attention. On 12 October 1991, 2000 guests were given a sneak preview of the building, exactly six months before the official opening of the destination. Finally, all the buildings on the famous Main Street are now visible. The street itself had not yet been paved at the time of these aerial photographs.

But it is especially in Frontierland that progress is noticeable. The rocks of Big Thunder Mountain have been given their characteristic ochre colouring in the American countryside. All around the mountain the rail used to guide the Mark Twain and the Molly Brown in the Thunder Mesa Riverboat Landing attraction is revealed. If you have a good eye, you will also notice that the construction of these two ships is underway. A hint: follow the rail! Finally, not far from there, the gardens of Phantom Manor have not yet been built, but the pathways and the queue appear.

Back to Discoveryland where this time the realization of the Autopia attraction is well underway! The course is taking shape as well as its entrance. We will have to wait a little longer before we can ride on its tracks.

Let’s move away from the heart of the tourist destination and go a few kilometers further to the site now occupied by Villages Nature Paris. Long before the arrival of this holiday resort, Disney’s Davy Crockett Ranch began construction in 1991. The pathways leading to the various bungalows are clearly visible through the trees in the woods. Closer to the motorway, the earthworks for the common parts of the hotel (swimming pool, shop, reception, restaurant…) are in progress.

We can also see the construction of the famous motorway ramp providing direct access to Disneyland Paris.

Last stop of the year 1991 in Serris where the most curious could discover the “Euro Disney space”. Once intended to present the future leisure complex to the general public, Euro Disney Resort information centre remained open between 5 December 1990 and April 1992. It housed a car park, a vast hall, a projection room, a shop and a fast-food restaurant. The most observant will distinguish the famous blue hat of Mickey Mouse as the sorcerer’s apprentice, enthroned on the roof of the building. Today, it is a Banque de France data centre that has replaced this very first reminder of Disney’s presence in Marne-la-Vallée.