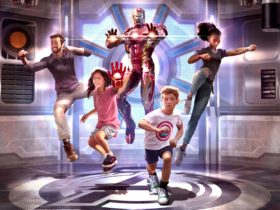 From the Rivers of the Far West to the Crater Pools in Discoveryland via the Rio Grande, Disneyland Paris has many waterways with a story to tell…

Our journey along the water begins in front of the Disneyland Hotel at Fantasia Gardens, which are truly enchanting with charming streams winding through rocks and an elegant pool. The fountains are reminiscent of Tivoli Gardens in Copenhagen, which inspired Walt to create the Disneyland Resort in Anaheim. They also remind us of fountains at Château de Versailles, with its famous great fountains that Imagineers visited when they were designing Disneyland Paris. They wanted the park entrance to pay tribute to the European castles that had them dreaming during their tour.

In Frontierland, the small city of Thunder Mesa stretches along the banks of the Rivers of the Far West, like the cities that American pioneers built along the Colorado, Rio Grande and Sacramento rivers. In the spirit of those great American rivers during the gold rush, our river protects Big Thunder Mountain from curious people who would venture too close to its mine, continuing its course to the remote lands of Frontierland through landscapes inspired by the beautiful U.S. river regions.

To discover these waters, simply board the Molly Brown and head west along Smuggler’s Cove, a water-eroded rock formation like those seen along the Colorado River, serving at one time as a dock for the famous Keelboats. But beware – the caves also offer a perfect hiding place for trappers and other river pirates peering out for a few travellers to rob!

Past Old Joe’s cabin we find Wilderness Island, an unspoiled place with cascading clear water, birch and cottonwood tree groves, and peaceful elk grazing in the shade like those found in Wyoming and Colorado.

On the other side of Big Thunder Mountain, there are spectacular new landscapes also shaped by water, such as rock formations similar to those of the Arches National Park in Utah, and hot springs and geysers like those in the famous Yellowstone National Park.

As for Adventure Isle in the heart of Adventureland, Imagineer Christ Tietz took the idea of an island full of hideaways, suspending bridges and other outdoor activities inspired by Tom Sawyer Island at Disneyland Resort and Walt Disney World Resort in Florida. These were adapted to the spirit of Adventure Land, and more specifically to the world of pirates. To do this, he based his design on three emblematic stories from European literature – Swiss Family Robinson, Treasure Island and Peter Pan – which were later adapted for film by Walt Disney. The names of the various waters on the island reflect these references: Swordsmen’s Sea, Doubloon Lagoon, Corsairs’ River, Cannonball Cove and Freebooter Falls.

Around Swiss Family Treehouse, Chris Tietz imagined cascades and waterfalls visible from all sides. These gushing springs also conveniently met their drinking water needs, as the head of the Robinson household designed an ingenious bamboo paddle wheel providing running water in the middle of the jungle! Plus, to the southeast of the tree, sandy beaches remind us of the New Guinea coasts where the family was stranded. Further north, waterfalls hide the entrance to secret caves where pirates may have hidden some treasures, while enormous amounts of water escape from the mouth of Skull Rock. The show is as visual as it is loud, and the sound of these waterfalls is in itself an invitation to travel… and to cool off during hot summers!

Water is also a founding element of Fantasyland. In addition to the waterfalls and fountains located in front of Sleeping Beauty Castle, the geography of this very “animated” place is punctuated by the river winding between the attractions, known as the Fantasyland Canal. Water is also an integral part of the experience on several attractions: Dumbo the Flying Elephant, with its golden fountains feeding the canal, Storybook Land and “it’s a small world” with the most joyful cruise around.

In Discoveryland, the water element is also present as soon as you enter the area, with bubbling Crater Pools emerging from rock formations most probably of volcanic origin, reminding us immediately of Jules Verne’s greatest adventures. The emblematic Discoveryland visionary is known for his Journey to the Center of the Earth and The Mysterious Island, not to mention Discoveryland Lagoon where Captain Nemo’s submarine is anchored, while Guests can visit Les Mystères du Nautilusattraction.

As for Lake Disney, the site of numerous festivities, be it the inauguration of the resort or Mickey’s Magical Fireworks, it appears to be like a giant magic mirror where we see the reflections of Disney’s Hotel New York: The Art of Marvel and Disney’s Newport Bay Club, both inspired by large coastal cities. It’s almost as if you were looking out at the ocean…