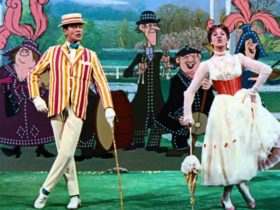 On March 14 and 15, 2002, thousands of guests were invited to discover Walt Disney Studios Park for its inauguration.

To this end, they received by by mail a large box reminiscent of an old-fashioned film reel … this one containing the official invitation as well as the weekend agenda!

On March 14, visitors celebrated a preview of the 10th anniversary of Disneyland Park, in the presence of Roy Disney, Walt’s nephew.

On the 15th, from 8:30 am, guests were able to rush into Disney Studio 1 and attend the multiple inaugurations during the day. Moteurs… Action! in the presence of Rémy Julienne and actor Roger Moore, The Art of Disney Animation with Roy Disney … It is also in this symbolic place that the Disney Legends of the year 2002 were presented at the end of the afternoon.

In the evening, an event worthy of a Hollywood blockbuster awaited them. Limousines, more than 200 international stars, red carpet, paparrazis and hundreds of journalists who witnessed the event. The ceremonies were broadcast in France on TF1 and live behind the scenes at Disneyland Paris, thanks to digital technology still experimental in France!

Memories … the Cast Members of the Walt Disney Studios Park pose at the entrance to the Park just a few days before the opening on March 16, 2002.

A special edition of the internal magazine is also published: