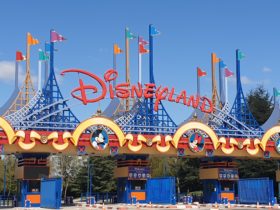 I stayed away from Disneyland Paris this summer!

The launch of the 30th anniversary of Disneyland Paris started almost three weeks ago, and this was the opportunity for our editors to ask themselves about the success of this launch. So they asked themselves the question: disappointment or consecration?

As usual, they do not agree with each other.

Launch of the 30th anniversary: disappointment! By Mélissa

Here we are ! The famous 30 years of Disneyland have arrived! And with all the events that have happened, it’s a breath of fresh air for the park.
I had a lot of expectations about this celebration. And I’ll tell you right away why I find it half-hearted.

To start with, we can discover the new show/parade: a world that lights up. The first thing that tickles me is the music… I just don’t find it Disney. It has an electro feel and a heady rhythm that I don’t like. Disneyland has already done much better in terms of music that you want to dance to, for example the music of the first reopening was much better in my opinion.

Concerning the show on the central stages, on the other hand I love the medley of different Disney’s, it goes from the most classic like Tarzan to the most modern like zootopie and vaiana, and I love it!
For the characters I’m still mixed, happy to see Miguel, Nic and Judy! But I expected much more for this celebration.
Besides this new “parade” there is nothing more! No particular show except the one in the evening.

Indeed, we can now see the D light : The first version really disappointed me, I must admit. I was annoyed to see just the ears (3) appearing like that, when we know what we are capable of today. But Disney has rectified the situation, I must admit that having the credits in live action amazed me! The rain of stars also made its effect. In short, Disneyland finally exploits the drone technology with much more impressive effects and I am now won over!  The pre-show is really beautiful to see, the castle is very well exploited.

Launch of the 30th anniversary : merchandising

To continue, I would like to dwell for a few moments on the merchandising, it is obvious that I cannot make my criticism of this anniversary without mentioning the deplorable organization of its merchandise. The fact that you can find them in very few shops and that the buyers fill bags without the park intervening makes me very angry. I mean, don’t make me believe that the Cast (of course they’re not responsible, this is to illustrate the “they can’t watch everyone” argument) don’t notice these punks with bags bigger than them, filled with multiple copies of foam soap?

I don’t understand why this kind of behaviour is not punished. First of all, because Disney’s image is tainted with resales at unbelievable prices, and secondly, because it leads to the dissatisfaction of the people who couldn’t afford these souvenirs!

To talk about the merchandise in more detail, I find most of the items very nice, but in terms of clothing, I didn’t find it transcendent for such an important anniversary. Is it necessary that I mention the 1992 range? Which is all alone in its department that no one goes near because it’s so bland and not very pretty?

Let’s talk about decoration, I’m not going to begrudge the new structures are a success! But ! I have a small disappointment at nightfall. From a simple spotlight, I expected better. What’s more, I regret not seeing decoration on the whole park! And not only on main street.

If I have to mention my biggest disappointment, it is probably the meetings with the characters. They all stop at 1:30 or 2:30. So in the afternoon there’s not much going on there. And again, there are not many characters to meet, at least not incredible new ones for the anniversary. As for the magic shots that appeared during the covid, they are disappearing more and more. Yet it was a really nice concept. Once again I don’t understand Disney’s choice. The meeting and photo experience are left aside whereas they are clearly appreciated by the guets.

In conclusion it’s a half-hearted opinion for me, I expected more experiences that stand out from the rest, additional new shows, characters all day, in short an experience that shakes up the park!

Launch of the 30th anniversary: consecration ! By Sandra

Let’s face it: a Disneyland Park anniversary is always an anticipated event! And this is true for both fans and casual visitors. While our eyes may be more demanding on this kind of celebration, we shouldn’t forget the instantaneous wonder of visitors who have less of an opportunity to come. In any case, I think that this anniversary was a real success overall. Perhaps the long difficult period we have just gone through from a health point of view has put my expectations into perspective, perhaps this return to the park without a mask and without distancing myself from the characters has boosted my enthusiasm: in any case, I find the 30th anniversary colourful and festive.

It’s true… They are mainly confined to the entrance, the gazebo and the Central Plaza. And if we can indeed regret that Main Street is only very discreetly decorated, it seems quite logical if we want to keep all the space free for the future Halloween and Christmas celebrations. For the 25th anniversary, the colour theme was blue and silver and the whole Christmas season was impacted by this. So, it was pretty, it’s true … but a Christmas without red and gold doesn’t really feel like Christmas!

But back to our 30th anniversary decorations: the medallion at the entrance that moves in the wind is a real novelty. This decoration takes on its full dimension at nightfall and it’s true that its orientation with its back to the public when leaving the park at night is a bit regrettable. The gazebo is splendid with its LED draperies and the sculptures that adorn Central Plazza are magnificent! They are original, artistic and perfectly made (a little downside on Merida which I love but which is a bit creepy and on the absence of Rapunzel only represented by the presence of Pascal). The shot of Cinderella’s sculpture with the castle in the background is just magnificent! The colours are quite well chosen. I think the setting is really nice.

Well, clearly, this is the gourmet speaking. I must admit that I was bluffed by the diversity of the food offer and the attention to detail with the coloured whipped cream, the purple soups and other little delicacies that we like to taste during a stay in the park. Obviously, i didn’t get to test everything but I hope the actual design will live up to the expectations on the visual. I only remember the Victoria milk shakes being relatively expensive and the results disappointing (Tic and Tac on the top of the milk shake looked like they had been under a truck).

I’ll be totally honest: once I saw the 30 years articles about the park, I was less won over than I was by the pictures. However, it’s really a matter of taste, and as tastes and colours are not debatable, I’m going to come back to the diversity that the park offers.

We always have the same flagship items, those which are declined according to the birthdays and the seasons: pins, key rings, magnets, cups, bowls, chocolates, T-shirts, jerseys, and so on. Not necessarily something to brag about! But, because there is a but, I find that it is the first time that the offer is so diversified; lunch box, cocoa powder or even the famous hand soap dispenser! Everyone will find something to their liking… hoping that there will be some stock, because obviously, that’s where the problem lies…

When I wrote this title, I immediately thought that people would answer me : “but what animations” ??? I admit… it’s a bit poor on that side. The encounters with the characters haven’t changed a bit. We don’t have the opportunity to take a picture with the characters dressed in their magnificent 30 years old costumes with iridescent colours. And that’s a real downside.

On the other hand, there is a magic shot with the addition of a 30 years souvenir frame which I find nice. But where I think they have done very well is in the parade! The floats are simple and unpretentious. The dancers don’t wear extravagant costumes. And yet, this parade hits the nail on the head! Simply because it is extremely festive! The music is very catchy, the choreography is very lively and the parade of characters is great. And on top of that, we have the right to see some rarely seen characters such as Judy, Nick, Joie or Miguel! The show stop on Central Plaza is a real eye-opener. And what is really nice is that the characters change scenes, giving you the opportunity to see many of them up close. For me, this parade is a total success.

Finally, I find the feat of the drone show for D-Light absolutely amazing! The image of this Mickey in 3-d spinning next to the castle on “a world that lights up” is just WAOUH! I have no other words. I was really blown away by this addition.

If one can really regret the insufficiency of the decorations or not adhere to the proposals of the park, I am rather conquered by this anniversary which remains merry and festive and I believe that it was really needed.