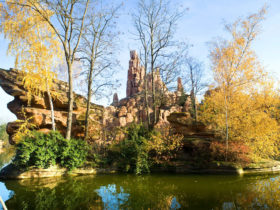 Disneyland Paris on the water

Nowadays, the ramparts of Fort Comstock are known for offering one of the most breathtaking views of Frontierland. But did you know they weren’t always open to the public? In early 1993, due to the success of Euro Disneyland, the park launched a major expansion program. It was at this time that the Frontierland team considered opening the upper levels of the fort by creating a “walk-through” tour.

Under the direction of Imagineer Jeff Burke, a series of concepts were created by illustrator Fernando Tenedora, known for his superb Phantom Manor drawings. Each of them represented legendary figures of the West going about their daily lives: prospector, outlaw, lawman, showman (Buffalo Bill), and frontiersman (Davy Crockett).

For the sake of authenticity, Imagineers also did research at the Buffalo Bill Historical Center, the Denver Public Library, the Circus World Museum, the United States Military Academy, and Culver Pictures Inc. They wanted to ensure that each scene was fully documented from a historical point of view, noticeable thanks to the attraction’s many props and set pieces.

The meticulously recreated scenes at Legends of the Wild West provide an ideal way to experience the American Pioneer lifestyle and to be immersed in the history and spirit of Thunder Mesa.