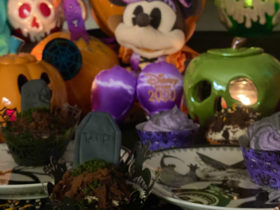 Don’t tell me you’ve missed the Disney news again? Well… just for you! Let’s rewind and hop! The DLP Bugle Rewind will give you a little update on the situation!

…Sing along, sing a song of Christmaaas ! Chaaante, c’est N… Oh sorry! I forgot we had company… ^^

But you can all sing your hearts out with me, because this is it, the Disney’s Enchanted Christmas has been making the park shine with a thousand lights since 13 November.

Shows, parades, characters in their holiday costumes, seasonal shopping and snacks, everything has been thought of to make the end of the year magical

Settle in with your blanket and hot chocolate and I’ll tell you all you need to know about this magical season!

It all begins with the jolly decorations on Main Street U.S.A. in the Disneyland Park with the snow which falls more than a dozen times a day! Did you know that the decoration workshop worked on about 300m of garlands and used 11,604 balls for the entire park decoration?

the numerous otherdecorations have made their appearance at the four corners of the park.

The scene at the Castle Stage is also prepared for the season.

The holidays are all about glitter! Nearly fifteen Disney characters are dressed in their brightest for the occasion! The elves of the Disneyland Paris Costume Workshop have made 200 new items for the characters.

We wish you a happy “Stitchmas” in your “Sandy Claws” outfit!

Mickey and friends are waiting for you at Meet Mickey in Fantasyland to show you their beautiful outfits in the colours of the season.

The show “Chantons Noël” debuted on 13 November a on the stage of the Videopolis theater in Discoveryland for 4 daily performances.

Emmanuel Lenormand revealed photos of the parade at the preview: enough to whet our appetite!

The completely new Christmas parade titled Mickey’s Dazzling Christmas Parade, can be used during the day or in the dark. In fact, it lights up at night! That’s what I call the little extra cinnamon on the hot chocolate, don’t you think?

Ho! Ho! Ho! As usual, Santa closes the sparkling parade. You can also find him in a selfie spot at Arcade Beta, inside Videopolis at Discoveryland until 25 December.

Now that I’ve piqued your curiosity and you want to see it for yourself, finish your hot chocolate, get out of your blanket and go celebrate Christmas in style at Disneyland Paris!

What’s on the menu?

It’s time to eat! Choose one or more Christmas pâtisseries (€5 each) at the Broadwalk Candy Palace shop on Main Street U.S.A.

The new chalets are operational at Walt Disney Studios and there’s something for every taste!

Mountain or Breton atmosphere? Let yourself be tempted!

Collect this series featuring the 7 dwarfs as a set of 3 figurines for €35 instead of €70 for every €40 spent. The other two figures will be available in March and June 2022.

The many pieces of The Lion King collection replace the Halloween range at Thunder Mesa Mercantile Building.

A new Christmas gift sack is available for the price of €13.

Many other Christmas items and many other collections of all kinds are waiting for you in the parks’ shops. And if you can’t make it, you can send an email to our partner at the following address: DreamShopping@D87.Paris

Complete your request with your contact details (name, phone number, postal address), the list of items desired and ideally photos of the items. Speed and quality service guaranteed!

Let’s start with a (little) bad news: it will have been short-lived but it is the return of the mask for children from 6 years old…

Now that the bad news is over, let’s take a deep breath and continue the enchanting momentum of Christmas with some other news to note.

The Walt Disney Studios Park is also getting into holiday mode.

Infinity Annual Pass VIP zones are available for booking again and day passes are open from 18 November until 30 April 2022! Be quiiiick!

The 2, 4 and 9 November marked the return of Mickey’s Magical Fireworks.

The Disney+ Day celebration took place on 12 November. For this special day, the Walt Disney Studios park was decked out in the colours of the streaming platform and had plenty of surprises in store for its visitors.

An exclusive 30th anniversary headband was created by a few people behind the scenes on the official Disneyland Paris Instagram account.

The Disneyland Paris 2022 coin from the Monnaie de Paris is now available.

Whether it’s for the safety or well-being of its visitors and Cast Members, Disneyland Paris works tirelessly to have the most beautiful destination in Europe!

The castle is almost finished with the leaves, only some scaffolding remains at the back. Isn’t it magnificent?

Let’s take a look at the progress of work on the attraction Les Mystères du Nautilus.

Concerning the Avengers Campus: the final red cladding for the façade of the new attraction WEB Slingers : A Spider-Man Adventure has been in place for a few days at Walt Disney Studios. The opening is scheduled for summer 2022.

The installation of solar panels on the Infinity car park continues.

The removal of the plexiglass continues at Disneyland Paris with the boats of the attraction “It’s a Small World “.

Disney’s Sequoia Lodge is preparing to reopening for its planned reopening on 1 December. It has been closed since March 2020 and the beginning of the health crisis.

The fences blocking access to the main building have been removed. Work (windows and cladding) is continuing on the annex buildings on the lake side on the left.

A fence is being reinstalled between the security controls and the entrance to the Walt Disney Studios. On the future control building, glass has been added on the first third of this extensive work.

At the Disneyland Hotel, the fences are multiplying to allow the rehabilitation of the establishment.

Remember that in November, some of your favourite attractions will be temporarily closed:

Disney Village is also ready for the Christmas season!

It’s the grand return of the DJ Party at Billy Bob’s Country Western Saloon. See you on Friday 12 and Saturday 13 November 2021.

DJ parties will be held every week on Fridays and Saturdays. From 8.30 pm to 2 am, admission is free and no reservation is required.

The Starbucks has been undergoing renovation for a few days. The lounge will remain open during the work as a takeaway.

Zoom in on the fortnight

Our reporters work almost daily in the parks and share their best shots with us. Here is a look at the top 3 photos of the fortnight that made the biggest impression on you.

Anniversaries of the fortnight

Releases of the fortnight

While we wait for its release in cinemas on December 15th, new official posters of the new Spider-Man movie No Way Home help us to wait.

Like Mei, be yourself! Check out the poster for Turning Red, due to be released in March 2022.

A new live action film is in the works for 2022 and it’s called Pinocchio. Don’t tell me you can’t wait to see it, your nose is getting longer!

Several new Marvel productions will soon arrive on the platform, including four animated series about Groot, Spiderman, Wolverine and the Marvel zombies.

And since superheroes never arrive alone, discover MSMarvel, a superheroine from this summer 2022.

Also for the summer of 2022, you can follow the adventures of Baymax.

News from Disney parks around the world

Minnie and Mickey are wearing their new outfits for the end of the year at Disneyland Resort.

The Eternals have just arrived at the Avengers Campus in the park to train future heroes.

Mickey’s Toontown will be reimagined with new experiences, more games and interactivity for young families in 2023.

The Christmas season has also taken hold in the various restaurants and bars of the Walt Disney World Resort hotels!

The attraction Guardians of the Galaxy : Cosmic Rewind is set to open in summer 2022 at Epcot.

“Fantasy Springs”, Tokyo DisneySea‘s 8th theme port, consists of three zones and a Disney hotel, and has a total development area of approximately 140,000 square metres, the largest since Tokyo DisneySea opened. The three zones are based on the Disney films “Frozen” (The Snow Queen), “Tangled” (Rapunzel) and “Peter Pan”. Scheduled to open in 2023.

Disney Wish, which will debut in summer 2022, will be packed with activities and features never before seen on Disney Cruise Line. In the Hero Zone, a futuristic sports arena will introduce passengers to a whole new type of family game: a highly interactive “game show” will challenge families to an incredible obstacle course with over-the-top physical challenges themed around the powers of the Parr family heroes and their friend Frozone.

Hero Zone will also host Jack-Jack’s Incredible Diaper Dash, which will allow the little ones to compete for the title of Diaper Dash Champion.

And when Hero Zone isn’t fully decked out in superhero gear, it will be a free sports centre where guests can play basketball, football, table tennis, air hockey, table football and shuffleboard.

Other Disney news from around the world

On 12 November, several emblems of the Disney parks around the world donned the Disney+ colours.

Here is the official logo for the 100 years of the Walt Disney Company. That’s going to be a lot of birthdays to celebrate next year!

The DLP Bugle Rewind has a little brother! We are pleased to present our newest product, the video: The DLP Bugle Express, which looks back at some of the highlights of Disney news. For this first enchanted issue, discover the magic of Christmas at Disneyland Paris in pictures. Sing, it’s Christmas!

At English language version of the video is available Twitter at the following address: @ED92Magic

More like Main Street U.S.A.? Discoveryland? Fantasyland? Adventureland? Frontierland? All??? ED92 has thought of you! Find the atmosphere of Disneyland Paris with the best songs of the park, its attractions and its shows with the ED92 radio. Enjoy!

Do you enjoy writing and sharing your passion for the Disney universe?

Disney, Pixar, Star Wars or Marvel themes hold no secrets for you?

Are you interested in The Walt Disney Company news?

If you answered ” yes ” to at least one of these questions, you may have a place on our happy team of volunteers!

You may have escaped to Fantasyland with the music of our Disney classics, riding one of the wooden horses of Lancelot’s Carousel… Or to Frontierland as a miner from the Big Thunder Mining Company to an epic tune… Either way, let yourself be transported by these unforgettable tunes and save the date! We look forward to seeing you on December 6th for the fifth edition of DLP Bugle Rewind. Enjoy and remember, if you missed the Disney news, check the DLP Bugle: when the trumpet sounds, the DLP Bugle will have told you everything!