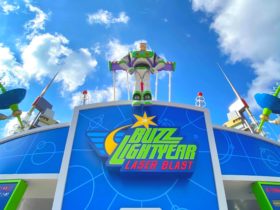 Buzz Lightyear Laser Blast is getting a new entrance for its 15th anniversary at Disneyland Paris!

Victoria Alonso has a Disney movie background and was trained by James Cameron and Tim Burton, among others. She has become one of the most powerful women in Hollywood thanks to her hard work, strong personality and know-how worthy of the greatest. But who is she really?

Born in 1965, in La Plata Province of Buenos Aires in Argentina, Victoria Alonso moved to Seattle at the age of 19 to be an actress. She soon moved to Los Angeles where she began working in the visual effects industry.

In 2005, she joined Marvel Studios as Executive Vice President of Visual Effects. She then worked as a co-producer on the films :

And as executive producer on ALL Marvel Studios productions since The Avengers (2012).

She is the first woman to win the Harold Lloyd Award for her achievements in special effects.

Victoria Alonso married actress Imelda Corcoran and they had a baby girl.

The key to its success

This more than exceptional lady has a way of moving forward…she never looks back. What is behind stays behind: she always looks forward.

One thing is certain. At Marvel, nothing is left to chance! Everything is scrupulously analyzed and there is no room for improvisation. They study the version of the story down to the clothing details: Thor’s hammer will always remain Thor’s hammer, there are constants that must be religiously maintained.

At Marvel, the production schedule illustrates how a studio works. Everything is planned down to the last detail.

She likes to point out that Marvel always delivers a clear message of female empowerment and diversity. During the two hours they watch their film, people can forget about social and cultural barriers, related to social class, religion. It’s a privilege for any filmmaker if half of the audience can do that, and for Victoria it’s a great victory.

She is dedicated to an extremely important cause. It is essential for her that all little girls have a role model and think that everything is possible! Because in life nothing is won, but in order to move forward you must be able to dream and believe. To the infinite and the beyond!