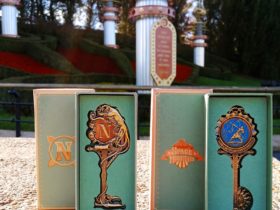 On 28 April 2021, Disneyland Paris announced the unprecedented and historic renovation of the Disneyland Hotel. Since then, little information has been released about the renovation project of this flagship hotel of the Parisian tourist destination. The hotel will be royal themed and will become the realm of many Disney Princesses and Princes, from classics such as Beauty and the Beast, Cinderella and Sleeping Beauty, as well as the recent animated hits Frozen and Rapunzel. We have obtained the building permit for this transformation and are now giving you the first secrets in three acts of the Disneyland Hotel’s renovation: les parties communal areas, the rooms and suites and finally Castle Club.

Although the number of rooms available will change very little, going from 495 to 487 (including 15 adapted for people with reduced mobility), the decoration and equipment will be largely reworked.

The concept art unveiled by Disneyland Paris in spring 2021 appears to showcase what would be similar to one of the Classic Double rooms, in this case with a Cinderella theme. The analysis we can make of it provides some information. In terms of furnishings, this room has 2 double beds, each with a bench at its foot, 3 bedside tables, 1 large 3-piece mirror that will house the TV, 1 single sofa bed, storage furniture on either side (including a mini bar), a desk/table area with an oval mirror and a mysterious box. The Classic Double rooms will be available for up to 5 people with an en-suite bathroom (bath).

As for the decoration, the headboards are composed of portraits representing the theme of the room. On the ceiling, a stylized canopy with a starry effect also contains a reference to the film in question. Here, Cinderella’s pumpkin coach. All around, the various tiaras of the princesses are placed on the frieze. On the floor, the carpet also reveals other details from the films. The cuffs of the furniture represent roses.

Classic King rooms will sleep up to 4 people. They will have 1 king-size bed for 2 people and what appears to be a sofa that converts to a double bed. No baths here. It will be a shower room with a shower cubicle. The Classic King is available in an accessible version with an open shower in this case. These include numbers 1208 and 1240.

The Classic Family rooms are identical to the Classic Double with the difference that they will accommodate between 6 and 7 people depending on the case, via the addition of a sofa that converts into a double bed and a single sofa bed.

The Premium Rooms (apart from those located in the Castle Club) have the particularity of being entirely concentrated on only part of the first levels of the West Wing (the one housing the swimming pool). This could explain what we presented in the previous article on the common areas. Namely, the creation of a privileged lounge dedicated to the intermediate premium categories and suites outside the Castle Club. The latter could thus refocus on an ultra-premium clientele while offering an alternative to the rest of the clientele. The Premium Rooms are available in King (3 to 5 persons), Double (4 to 5 persons) and Family (5 to 7 persons) configurations.

The Classic King is also available in a version adapted for accessibility.

The suites outside of Castle Club (formerly called “Junior Suites”) remain in the renovation project. Their themes will be Rapunzel, Frozen, Beauty and the Beast, Cinderella or Sleeping Beauty.

Similar facilities can be found from one to the other and they will usually sleep up to 5 people. They will be equipped with a king-size double bed, a double sofa bed, a single sofa bed, a sitting area and a bathtub. The Rapunzel Suite (1056) will be adapted for PRM. Therefore, it will have an open-plan shower with a sliding door instead of a bathtub. The suites are spread throughout the various corners of the hotel.

The hotel will offer a wide range of room types to suit most needs. Most of them will be interconnected, so it will still be possible to stay with more people. The renovation of the Disneyland Hotel’s rooms will be an opportunity to modernise the equipment and decoration while adding numerous references to the Disney princesses. The global standardisation of the facilities dedicated to people with reduced mobility should also facilitate their stay.

Find analyses of the communal areas here and the Castle Club here.