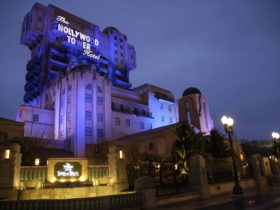 The Twilight Zone Tower of Terror™ : behind the scenes of the hotel

On 27 February 2018, Robert A. Iger, then Chairman and CEO of The Walt Disney Company, announced a multi-year development plan for Disneyland Paris. After the inauguration of the universe dedicated to the Pixar film “Ratatouille” in 2014, the project includes three new themed areas dedicated to Marvel, Frozen and Star Wars. Discover the outline of the Walt Disney Studios Park extension with its new attractions and shows.

Lake zone: the heart of the park

At the centre of this expansion project, a 3-hectare lake (smaller than the one at Disney Village) will become the new heart of Walt Disney Studios Park. This body of water will be accompanied by promenades, landscaped banks and restaurants on the banks promising a striking panorama. The various thematic universes will be located all around. In the axis, the area inspired by the animated film Frozen will become the showcase of this space. On the left, Star Wars will plunge visitors into new intergalactic stories. All around, numerous tree-lined embankments will attenuate the visual and sound impacts for visitors and residents alike.

The lake will be a giant open-air stage and will also host various daytime and night-time shows. Its technical installations will offer 360° animations composed of fountains, sounds, lights and special effects.

Marvel: the universe of superheroes

Avengers Campus will be the first of three new themed areas to be delivered. The superheroes of the Marvel franchise will be headquartered on the remains of Backlot (2002-2019). Armageddon: Special Effects will disappear in favour of WEB SLINGERS: A Spider-Man Adventure. A new theme for a variation of Toy Story Midway Mania or Buzz Lightyear Laser Blast to a lesser extent. As for the iconic Rock ‘n’ Roller Coaster, Iron Man is preparing an epic adventure with many Avengers.

The garage of the former Moteurs… Action! Stunt Show Spectacular will host a character meet-and-greet location. The former Restaurant des Stars will become an Ant-Man table service: Pym Test Kitchen. The Blockbuster Café will keep its Fast Food formula themed like a Stark Industries robotics workshop. Outside, numerous animations and photo opportunities will offer an immersive experience to new recruits.

Frozen: the Kingdom of Arendelle

In the world of Frozen, a 40-metre high snowy mountain will overlook the reconstructed kingdom of Arendelle. It will be visible as soon as visitors enter the park, guaranteeing a breathtaking horizon. The architecture of the castle and its kingdom will obviously be of Norwegian inspiration. Its subjects will experience adventures with Anna, Elsa, Olaf and their friends. This immersive space will host a brand new attraction, a restaurant, shops and places to meet the various heroes of the film.

Here too, the Star Wars universe will be home to a major attraction, food and beverage outlets, shops and exclusive encounters with the characters of the franchise imagined by George Lucas.

The Walt Disney Studios Park expansion also includes many ancillary projects aimed at improving the coherence of the existing spaces, modernising the infrastructures and renewing the experiences offered. It is within this framework that several shows have been replaced in recent years with the arrival of Mickey and the Magician (2016), Marvel Super Heroes United (2018), Frozen: A Musical Invitation (2019) and Disney Junior Dream Factory (2021).

More recently, the attraction Studio Tram Tour: Behind The Magic (2002-2020) gave way to an adventure imagined around the Pixar animated film “Cars”. Opening on June 17, 2021, Cars Road Trip will complete Worlds of PIXAR, the first of the four zones that will make up the future park.

Other developments will affect the Walt Disney Studios in the coming months and years. A demolition permit was recently filed to remove the Production Courtyard show stage. This should free up space for the new Avengers Campus. In addition, we know that the Disney Studio 1 building and the Stunt Show Arena are expected to be the next facilities to receive building permits.

Much further on, it is certain that the Walt Disney Studios Park expansion plan has not yet revealed all its secrets. Eventually, other universes will be built around the lake, completing the Frozen and Star Wars areas…